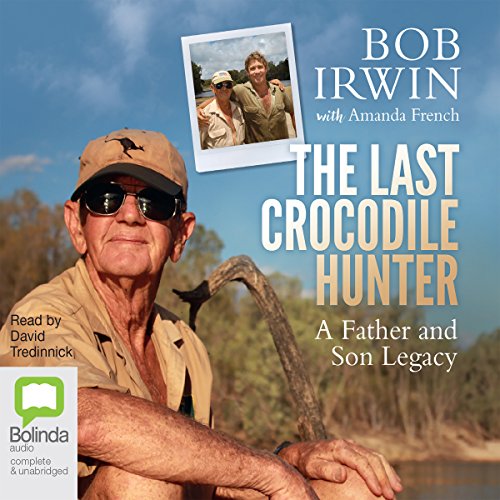 Bob Irwin's extraordinary life as a wildlife pioneer, father to wildlife warrior Steve and founder of Australia Zoo, told in his own words.

Bob Irwin grew up in the Dandenong Ranges, where his passion for wildlife was born. A near-death experience while working as a plumber made Bob realise he needed to follow his dreams, so he and his wife, Lyn, moved their young family to Queensland, where they opened a wildlife park on the Sunshine Coast. The Irwin children grew up in and around the Beerwah Reptile and Wildlife Park, learned about the animals there from their dad and cared for orphaned wildlife at home with their mum. Passion for the environment and all animals became a way of life for them.

This unique upbringing had a profound impact on Bob's son Steve, who followed in his father's footsteps and became famous around the world as the Crocodile Hunter, an educator and wildlife warrior. Bob nearly didn't survive the sudden death of his adored wife, Lyn, and it was Steve who helped him face life again. When the world tragically lost Steve to a freak diving accident, it wasn't just the animals that lost the best friend they ever had. Bob did, too.

Describing it as moving forward without a map, Bob spent many years burying himself in physical work as a means to cope with the loss of his son. It was the natural world and the animals within it that helped Bob to keep going, and since then he has continued to fight for his beloved Steve's legacy of protecting the wildlife, environment and planet on which our own survival depends.

Entertaining, moving, impassioned and inspiring, The Last Crocodile Hunter shows the heart and soul of a great Australian character, father and wildlife campaigner.

What listeners say about The Last Crocodile Hunter

As a long standing admirer of Steve Irwin, his work and all he stood for, I was very much looking forward to listening to this. I did indeed learn a great deal about Steve I didn't know and admire him all the more, but I now have an added respect for his father, Bob; a man with truly the most incredible drive and story. Rare I've heard an audio book so well read either. Hugely recommend.

a good insight into the Irwin legacy

heartfelt and heart warming tales, wonderfully brought to life by fantastic narration. If your an steve Irwin fan and on the fence about this audiobook, don't be. it's well worth your credit in my humble opinion. thank you Bob and steve.

My favorite book I have listened to this year.
I happen to be watching crocodile hunter dairies and noticed many people and stories from this book. Loved this book. ThankYou Irwin family for what you do and continue to do for our animal family

i am a fan of the show so this book was very interesting for me. i loved the Australian accent of the narrator. it made it more authentic.

I loved the heartwarming honesty!
I highly recommend it!
I loved watching Steve’s love and enthusiasm on his TV shows! And I loved Bindy-she was adorable!

loved hearing more about Steve and his dad. a great book for the crocodile hunter fans in the world

A must for any reptile and animal lover!

Absolutely great book! Well written with many perspectives! Hearing it from Bob Irwin and his passion for animals and his family.

This book was so well thought out. I was so captivated by this book.I have gone through some hard times in my life and to lesson to the hard time that the Irwins went through with losing Steve and his Mom my heart just went out to them. Thank you for letting the world into your personal life.

Thanks for reminding me what matters!

wish there was a woman narrating when a woman's part came up. missed when some changed.

A beautiful tribute to a son from a father. What incredible lives you have led. I don’t think I fully understood the concept of a keystone species until I started watching the show as when it first aired. Steve’s enthusiasm was definitely catching. I hope all the grandchildren come to appreciate where it all started.

Interesting insight by the man who started it all.

Great book. Bob Irwin basically built the zoo with his bare hands. He was a conservationist before that was even a thing. He is an inspiration.

If you are looking for a book just about Steve Irwin, you would be somewhat disappointed. The book does give you an inside look of his life and character, but this book is about Bob. His life, his loss, his journey. It does talk about the loss of Steve, and the loss of his wife Lyn.

It reminds us that even through our losses and hard places, we can still do good. We can still care and help the world.