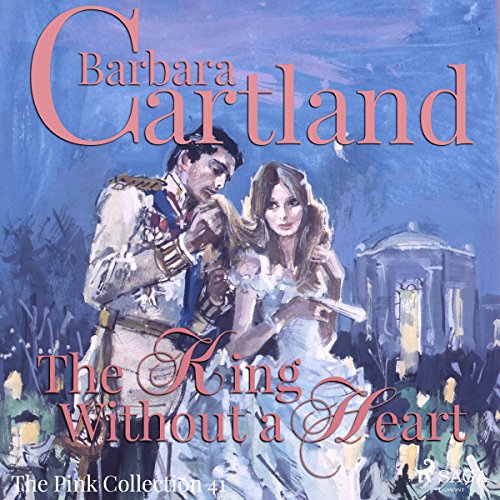 The King Without a Heart

When Lord Rupert Brooke and his wife are killed in an accident, their only child, Titania, was forced to live with her uncle, the Duke of Starbrooke, who had Titania is broken-hearted leaving behind her horse which she adores and her Nanny who is the only person who really loves her.

When she reaches Velidos, the King, who is the half-brother of Prince Frederick, finds her in tears and does his best to comfort her. Secretly Titania rides with the King early in the morning before her cousin is awake and discovers that he prides himself on having no heart.

How she gains the King's confidence, how she manages to save the King from being murdered and how she eventually finds her own happiness, is all told in this unusual and exciting story by BARBARA CARTLAND.

Between the ages of 77 and 97 she increased her output and wrote an incredible 400 romances as the demand for her romances was so strong all over the world. She wrote her last book at the age of 97 and it was entitled, perhaps prophetically, "The Way to Heaven". Her books have always been immensely popular in the United States where in 1976 her current books were at numbers 1 & 2 in the B. Dalton bestsellers list, a feat never achieved before or since by any author.

What listeners say about The King Without a Heart

This story is well written and beautifully performed!!!
A joy from beginning to the end and leaves you with a happy glow if you love romance novels!

This is certainly one of Barbara Cartland‘s best.

I really enjoyed the narrator for this book because he had a very handsome voice and it was updated and doesn’t sound old. The story was very good and a nice clean short romance. I bought this using cash and didn’t use a credit because it is a short story. I do plan to read more by her.