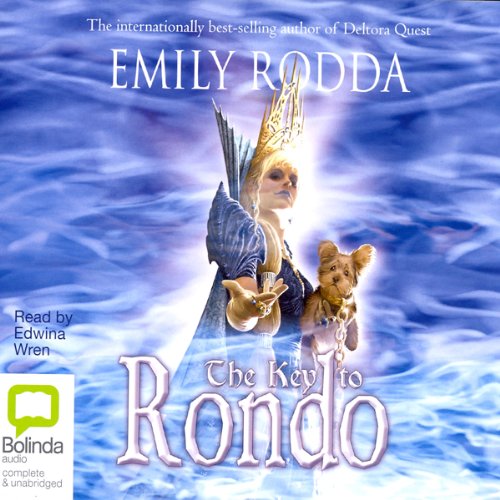 The Key to Rondo

By: Emily Rodda
Narrated by: Edwina Wren
Try for £0.00

Turn the key three times only.

Never turn the key while the music is playing.

Never pick up the box while the music is playing.

Never close the lid until the music has stopped.

The old music box, with its strict rules, has been carefully handed down through Leo's family for hundreds of years. Painted scenes of villages, mysterious forests, a castle on a hill and a queen in a long blue gown decorate its sides. An astounding secret is hidden beneath its gleaming black lid. Now it is Leo's music box, and although he respects the rules, his least favourite cousin, Mimi Langlander, does not. When the rules are broken, Leo's ordered life is changed forever as he and Mimi plunge together into a thrilling quest in the fantastic world of Rondo.

What listeners say about The Key to Rondo

Author Emily Rodda has created a charmingly engrossing tale of two cousins who enter the music box world of Rondo. There, the cousins Leo and Mimi, meet a cast of familiar fairy tale characters. The reader (or listener in this case) will find humorous and somewhat different perspectives on the lives of some of these characters. For instance, we are introduced to Bertha, a rather vain and seemingly shallow pig, who is a fierce and successful wolf fighter. How about the gingerbread men called "dots", obnoxious pests that infest cellars and dark places. A clever and funny character is the Hidey Hole, who you just have to meet to understand. And then there is the beautiful and evil Blue Queen with a magic mirror who has enchanted the beautiful daughter she hates. Leo and Mimi who don't like each other, end up being thrust into an adventure which will teach them some things about themselves and each other. They learn to get along with one another, learn the extent of their own courage and perseverance, and discover that things aren't always as they first seem. We are treated to a host of revelations about the different characters along the way which keeps the story moving and interest from waning.
Edwina Wren does an excellent job of narration. The different voices she uses for each character is quite impressive, so much so that it seems that there are numerous speakers rather than just one.
I look forward to hearing the next installment on stories from Rondo!