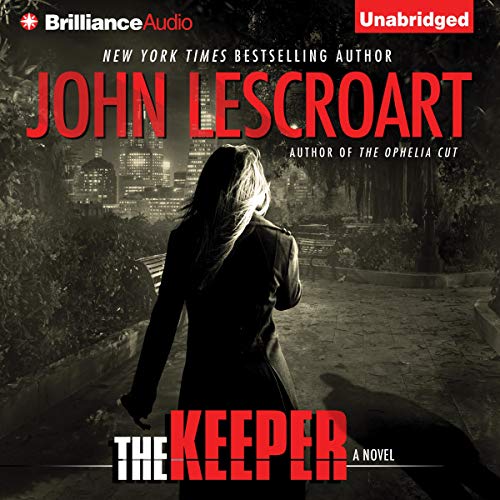 By: John Lescroart
Narrated by: David Colacci
Try for £0.00

From New York Times best-selling author John Lescroart, a riveting novel featuring Dismas Hardy and Abe Glitsky on the hunt for clues about a woman who has gone missing.

On the evening before Thanksgiving, Hal Chase, a guard in the San Francisco County Jail, drives to the airport to pick up his step-brother for the weekend. When they return, Hal’s wife, Katie, has disappeared without a clue.

By the time Dismas Hardy hears about this, Katie has been missing for five days. The case strikes close to home because Katie had been seeing Hardy’s wife, a marriage counselor. By this time, the original Missing Persons case has become a suspected homicide, and Hal is the prime suspect. And the lawyer he wants for his defense is none other than Hardy himself.

Hardy calls on his friend, former homicide detective Abe Glitsky, to look into the case. At first it seems like the police might have it right; the Chases’ marriage was fraught with problems; Hal’s alibi is suspect; the life insurance policy on Katie was huge. But Glitsky’s mission is to identify other possible suspects, and there proves to be no shortage of them: Patti Orosco - rich, beautiful, dangerous, and Hal’s former lover; the still-unknown person who had a recent affair with Katie; even Hal’s own step-mother, Ruth, resentful of Katie’s gatekeeping against her grandchildren. And as Glitsky probes further, he learns of an incident at the San Francisco jail, where Hal works - only one of many questionable inmate deaths that have taken place there. Then, when Katie’s body is found not three blocks from the Chase home, Homicide arrests Hal and he finds himself an inmate in the very jail where he used to work, a place full of secrets he knows all too well.

Against this backdrop of conspiracy and corruption, ambiguous motives and suspicious alibis, an obsessed Glitsky closes in on the elusive truth. As other deaths begin to pile up he realizes, perhaps too late, that the next victim might be himself.

What listeners say about The Keeper

Not his best? Still very entertaining.

John Lescroart has been doing this now for almost thirty years, and IMHO he is still one truly fine, readable author. And David Colacci has become the only person I could imagine doing these books, rather like the comment others have made that George Guidall is Walt Longmire. This book does have too many murders, I will acknowledge, and it is really not plausible that that many of them could have happened in the San Francisco County jail. Usually Mr. Lescroart strives for and achieves better credibility than he does here. However, other reviewers have claimed that they knew quite early whodunit. Not me. Not until the last few minutes, when it becomes truly obvious that the culprit was ??? Do not call me a spoiler. The book starts with the killing of Katie Chase, the wife of a guard at the jail, Hal Chase. Hal is charged with her murder, and that is where both Diz and Abe get involved. As I have said before, I have worked in this setting for almost forty years now, and I feel like I would know both Dismas Hardy and Abe Glitsky if I met them on the street. Lescroart is so good at this that they are full-bodied, flesh and blood people to me. I have been there for the raising of their children, all the way through what seems to be coming, which is the retirement of both of them. That may not happen, as then what would they do? IDK. So in all likelihood he will keep spinning new yarns that will, frankly, be enough fun for me to read that I will buy them as soon as the books come out. I will admit that I bought both the audiobook and the written e-book of The Keeper, perhaps because I am at the age now where I am forgetting a good deal of what I have done and not done.
In any case, I digress. This book is still a good whodunit, and once again a truly accurate description of the city of San Francisco in all of its contradictory, confusing and glorious aspects. Only Mr. Lescroart has been able to nail the place so vividly, such that I can't imagine another author trying it. Lots of them do LA, so to speak, and they do a fine job of that. Robert Crais, to mention one of the best. But Mr. Lescroart has a fan for life in me. I am in his thrall. It's not that he can do no wrong, but it would have to be a really lousy book, and that seems unimaginable. So, enjoy! Fun is its own justification.

This is classic Lescroart. It's set in San Francisco - probably a San Francisco of yesterday but he describes a crazy place I knew and liked. He's not a lawyer but he gets the procedural stuff and the sense of criminal law practice as well as anyone in the writing business. Dismas and Fran are getting older and in a way, they are both getting cooler.

David Colacci is, of course, the voice of the series and does for Lescroart what Richard Ferrone has done for the Prey Series.

One of slower stories of the Dismas Hardy series

The first 7 hours of this story are quite slow. A 2 or 3 paragraph synopsis/summary would have been adequate for that length of the story.

The plot finally picked up around hour 8 and got interesting. Lescroart is a favorite author but I feel he should have abbreviated or added better pacing to the majority of this 12 hour ( audio length) story

Would you ever listen to anything by John Lescroart again?

Yes. I have listened to all the Hardy stories over the years and some of Lescroarts other work

What does David Colacci bring to the story that you wouldn’t experience if you just read the book?

The end had a good plot twist. Just not quite worth the time to get there.

Where did Hardy go?

Typical for the series except this one uses Abe Glitsky more actively. There were moments in the book that I felt Abe was made to look doddering, and deserving of his forced retirement. He made a bunch of rookie mistakes and I sort of winced at his foolishness. And even in the big solve, where Abe stands front and center, I didn't feel it was genuine.

Hardy was barely in the book, which this time was fine; but I wouldn't call it a Dismas Hardy book by any stretch.

Now about the story. The story was silly. A woman is murdered. Her husband is accused. There are all sorts of infidelities going on in marriages and in various departments of criminal justice. The resolve was a little implausible. You have to wonder if some of the bad behavior will continue by those in the story identified as truly guilty. You have to wonder if the fall guy (the final victim) was a convenience for the rest of the criminals in that circle. It seemed rather convenient to have the killer of the primary dead woman connected to all the deaths. About six murders occur in this book and by the end, there may be six previous to blame on this killer. Yet, it has no tension, no OMGs, no being caught off guard and no big surprise from the big reveal.

The ending was too clean. Too much information just showed up in the newspaper to justify the killer's motives, etc. I just kind of shrugged at the end. Abe's part in the finale was significant, and yet he seemed like an accidental hero. No final scenes with his wife. Mention of a potential reprimand, but nothing active or tense. The final scenes bring Hardy back into the picture, lecturing Abe, and, having taken little or no part in the story, Hardy morphed into a minor, all but forgotten character.

The series is usually better than this, but **The Keeper** wasn't the worst of them.

I was thinking how much I enjoy this series...

As I was listening to this book, I was thinking to myself that I miss Dismas and Abe. I am glad for a chance to catch up on their adventures. Personally, I am a legal mystery fan and love the court room dramas. I have all of the books in this series and always look forward to the next installment. This book entertained me and kept me guessing. I look forward to the next one from John Lescroart... I am a fan of this series and will continue to listen to his books. Worth the credit and the time.

A fun book to listen to.

In the last book of the series Lt. Abe Glitsky’s had been forced to retire from his job as Chief of SFPD homicide department. This book is mostly about Abe and what he is doing with his life. He sits at home reading until his friend Dismas Hardy, a defense attorney has him do some investigation for him on a new case of a missing woman. The woman Katie Chase, wife of a Sheriff Deputy who works at the jail is missing. The story appears to be the usual who-done-it until Katie Chase’s body is found. Then it turns into a story of political corruption or does it? Glitsky has stopped following the usual investigation procedures and is on a crusade. The suspense builds as the story twist and turns. I had picked out my suspect for the murder about half way through the book, but then as the story proceeds I start second guessing myself then the story looks as if it has concluded and I must be wrong. But the story keeps going and oh boy, I turn out to be correct. The book is lots of fun and the suspense keeps one reading. Guess I will have to wait until the next book to find out if Abe is working for the D.A. or is going private. I enjoyed the dulcet tones of David Colacci who has narrated the series from the beginning. It is great when the publisher keeps the same narrator throughout the series. I would give this a 3.5 start but alas they don’t allow for half stars.

I read Lescroart for years, and loved the characters as well as the San Francisco scene. But the reader is flat and boring. Couldn’t stand it to the end.

I miss the old Abe Glitsky

I have always liked the Dismas Hardy series and was disappointed by Abe's new role.

This was one of those books that you would wish just kept going. Good listening book.

Too many characters.
Repetitive.
Thought it would never end.
Love David Colacci, but he couldn’t save it.