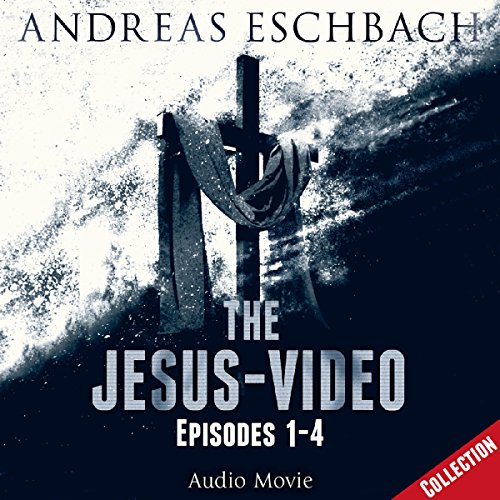 A strange find at an archaeological dig site in Isreal may change our view on human history and religion. When science fiction author Peter Eisenhardt is called by the multimillionaire John Kaun to help at the site, he does not understand why. At first. Once he finds out that the team in Israel has found a manual of a modern video camera in an ancient tomb, he begins to see why Kaun asked for him. Due to his research, Eisenhardt is an expert on fictional time travel and many of its theories. If this manual is not a joke and is actually 2000 years old, Eisenhardt may help answer two simple questions. Where is the camera? And what could be on it?

This collection contains all four episodes of the audio thriller mini-series "The Jesus-Video".

Episode 1: In the Beginning.
Science fiction author Peter Eisenhardt is quite surprised when the media mogul and multimillionaire John Kaun calls on him to assist at an archeological site in Israel. Stephen Foxx and Judith Menez are working there as well and they become witness of the most extraordinary archeological find in history: the manual of a modern video camera in a two-thousand-year-old tomb. The race to solve the mystery begins.

Episode 2: The Holy City.
The manual of a modern video camera in a 2000-year-old tomb can mean only one thing: In the lifetime of Jesus Christ, this camera could have been used and might have made recordings of great historical impact. Meanwhile, Stephen Foxx deciphers parts of a message that was found together with the manual and which he kept secret from the multimillionaire John Kaun. The few deciphered pieces are enough to come to one conclusion: this is a letter from a time traveler.

Episode 3: The Mission.
The deciphered letter assures: The Jesus-Video exists. The hunt for the recording that will unhinge the known world begins. Though it's not just Stephen Foxx and his opponent John Kaun searching for answers, soon the Vatican is interested in the ominous video as well. The hunt leads everyone to the one city that three world religions dispute over: into the Judean mountains between the Mediterranean and the Dead Sea, the historical center of Jerusalem.

Episode 4: Exodus.
Stephen Foxx and his companions are only one step ahead of their enemies in their hunt for the Jesus-Video. Finally, in the ruins of a seemingly abandoned cloister the two groups clash. While Stephen Foxx and his team learn the last remaining secrets surrounding the video, John Kaun's mercenaries launch an assault on the cloister. Now, Stephen and Judith are not only trying to find the video, but they have to fight for their lives.
©2017 Bastei Lübbe (Lübbe Audio) (P)2017 Lübbe Audio
Science Fiction
Show More Show Less

What listeners say about The Jesus-Video, Episodes 1-4

I was expecting pulp trash but I was drawn in to this well crafted tale and enjoyed the whole thing. Great production values, great music and superb cast.

Not A Book, But An Experience

The Jesus-Video is probably the most delightful surprise I've had on Audible. I picked it up on sale due to the interesting premise, but the low rating count lowered my expectations. I was blown away by the level of writing and production quality this book has and already downloaded its sequel. Audible needs to hire the team behind The Jesus-Video and bring them into their production house; it really is the best listening experience I've had on Audible. Each character has their own voice actor, with the narrator separate as well. There's a few sound effects placed in sensible places but not overly so and they don't crowd the dialog; just enough to set the atmosphere. Also, the music perfectly compliments the tone of the story and further heightens the drama.

The story is very unique, it can be described as Indiana Jones, meets National Treasure, meets a touch of Outlander. The archaeological aspects brings back memories of Indiana Jones while the competitive race to learn the truth reminded me of National Treasure. These two parts are really fun and exciting as different teams discover clues to the final prize. It's also fascinating to imagine what life would be like 2000-years ago and to see the events of Christ unfold before our eyes.

I also appreciate the respect the author paid to faith without pandering. In my experience books often pick a side and make it obvious who the target audience is, either disrespecting those of faith, or overly pandering to Christians. The characters and organizations act realistically and it's easy to believe this could happen in today's world.

Again, I'm very impressed with this production and has set the standard for full cast productions. The story is super fun and exciting while also drawing you into the mystery. I highly recommend this book!

Over the top, but fun

The story is totally over the top, but it’s a well-acted and well-produced adventure, and it certainly held my interest. I stumbled across it looking for titles with David Rintoul, one of my all-time favorites, who serves as narrator. Many stock characters but a few nice little twists as well. I plan to get the sequel, which from the description sounds even more extravagantly over the top. That doesn’t bother me. If you’re going to go there, you might as well GO there.