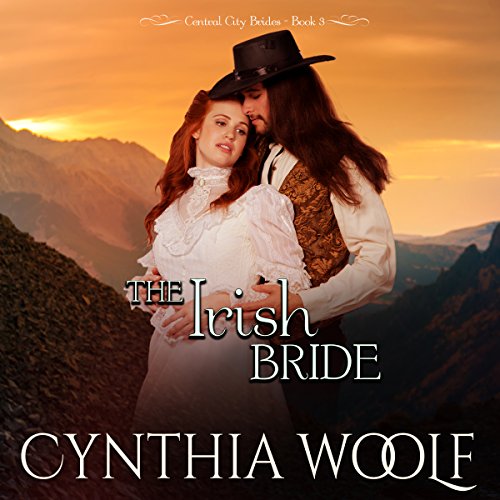 By: Cynthia Woolf
Narrated by: Beth Kesler
Try for £0.00

Erin O'Toole is no stranger to violence. Growing up surrounded by one of the most powerful gangs in New York, Erin learned how to survive. But when her little brother is killed in a gang war, Erin swears she'll never be part of her father's world. Desperate to escape the pain of her loss and a future she doesn't want, she risks everything to become a mail-order bride.

After years of being on the wrong side of justice, Henry Jacobs has made things right. Now he is a peaceful blacksmith in Central City in the Colorado Territory and all he wants is a wife and children of his own.

One look at Erin, and Henry falls for his feisty new bride. But Henry has secrets that could tear their marriage apart. When a man from Henry's past threatens his new life, Henry finds he has no choice but to become a man she'll hate in order to save the woman he loves.

What listeners say about The Irish Bride

Erin leaves New York, Why? What happens to make her leave her job and home? She goes to Matchmakers and Co. to agree to become a Mail Order Bride. She accepted Henry!

This time trouble finds Henry, an old ex-friend follows Henry and his new wife, Erin. Why? What does he want from Henry?

Please get this awesome Audiobook and listen to it yourself, that way you will find out everything that happens between Henry and Erin.

It is awesome! Especially Beth the narrator. She brings life into the story as she reads to you. I know that you will enjoy it.

We all love mail order bride stories. But "The Irish Bride" has a different twist to it. We start with Erin wanting to leave New York City to become a bride. And one would think that she is going to be running away from her family. She goes and meets up with Henry. All is good. Actually, things are going great. Until, Henry's past comes back to haunt him. Beth Kesler did a wonderful Irish accent for Erin which really made the story fun to hear. I enjoyed listening to the story. Great job.