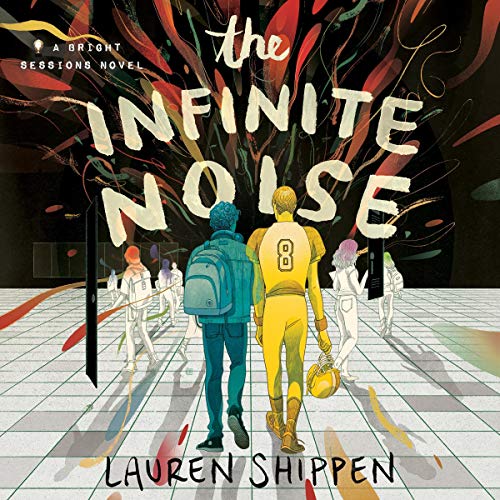 "Narrators James Fouhey and Briggon Snow give stellar performances in this quiet YA romance.... Both narrators authentically capture the ups and downs of teen romance and keep listeners engaged." (AudioFile Magazine)

Lauren Shippen's The Infinite Noise is a stunning, original debut based on her wildly popular and award-winning podcast The Bright Sessions.

Caleb Michaels is a 16-year-old champion running back. Other than that his life is pretty normal. But when Caleb starts experiencing mood swings that are out of the ordinary for even a teenager, his life moves beyond "typical".

Caleb is an Atypical, an individual with enhanced abilities. Which sounds pretty cool except Caleb's ability is extreme empathy - he feels the emotions of everyone around him. Being an empath in high school would be hard enough, but Caleb's life becomes even more complicated when he keeps getting pulled into the emotional orbit of one of his classmates, Adam. Adam's feelings are big and all-consuming, but they fit together with Caleb's feelings in a way that he can't quite understand.

Caleb's therapist, Dr. Bright, encourages Caleb to explore this connection by befriending Adam. As he and Adam grow closer, Caleb learns more about his ability, himself, his therapist - who seems to know a lot more than she lets on - and just how dangerous being an Atypical can be.

"What if the X-Men, instead of becoming superheroes, decided to spend some time in therapy?" (Vox on The Bright Sessions)

There are better books out there...

Real rating 1.4 stars so rounded down to 1 star. So, this review is going to be unpopular. First off this is a YA book written for a straight female audience about gay young men. As a result, it sparks lots of problematic issues regarding fetisisation of gay/bisexual men by SWW*.

The book uses a dual POV writing style but seaming as there is very little to differentiate the two MC's I am not sure what bonus this is adding to the book? The main protagonists of the book are Caleb (Jock football player who has the super power of empathy!) and Adam (Nerd loaner who suffers from depression). Let’s start by saying that the book keeps of trying to draw parallels to 'X-men' type super powers but empathy is more on the tepid side of superpowers; did we learn nothing from Deanna Troi on Star Trek TNG?

The next big point of the book is the relationship between Caleb and Adam. This is where the SWW* issues really start to show. First, they are supposed to be 17 years old; which is very odd seeing as they have been written like they are prudish 12-year-old girls i.e. completely desexualised and completely over think everything. It's not as if two 17-year-old boys would ever think about sex... Then there is the issue of Caleb's 'Gay for you!' reason for dating Adam; it's something which happens a lot in m/m romance novels and I've started to see more of it in gay YA novels. It needs to stop! But one of the biggest issues I've had when reading this is the lack of intimacy between the two MC's (and I'm not talking sex) I think they may have kissed once or twice but not sure if it was on or off page.

The plot was long and stodgy for the first 3/4 of the book while the last 1/4 was rushed and the resolution was never completely explained. It was one of those books where I ended the book by wanting the time I had spent with it back.

* Straight** White Woman
** Maybe you identify as 'queer' because of that one time, at that party, whilst drunk, you kissed someone of the same-sex.

But the real question is ARE YOU OKAY?
(i have to leave extra words here so I can send this)

definitely cute, but nothing more. it's worth the read for the romance but the superpower is the stupidest thing I've heard in my entire life. seriously? having empathy is a super power? and it makes him DRUNK? nope. also I wish the book wouldve explore Adam's mental health a lot more than it did, it brushed off so many important topics. otherwise, cute. I'll continue reading it mostly because the second book will be about a guy that was introduced that I'm veeeery interested about. hopefully I'll see very little of caleb, the most extra character in the entire world. the narrator for adam did an incredible job, I LOVED him. the narrator for caleb however, not so much. but he wasnt bad, I guess he fit for Caleb's angst and I cant tell for sure if it's the narrator or just caleb. I reccomend tho!

I wish I could rate it higher!

I haven’t been able to stop listening to this. Easily one of the best books I’ve read (listened to).

The way Adams depression is portrayed, I’ve never heard a more accurate description of what it feels like, and it honestly brought tears to my eyes (not the only time I cried whilst listening to this!)


I have been recommending this left right and centre, and am now going on to listen to all of the ‘Bright Sessions’ podcasts, as I just need MORE.

I wasn't sure what to expect, I suppose I was expecting a little more sci-fi and a little less romance. But this was really just a m/m romance with a touch of sci-fi. I'm good with romance, I enjoy m/m romance a lot, I think I was just expecting something a little different than what I read.

If you're looking for a nice m/m teen romance, you'll enjoy this. If you're wanting a lot of sci-fi, you might be disappointed. Since this is a series, the sci-fi might become a larger part of the story as it progresses. But that's just a guess. It's definitely indicating something developing in the background.

As for the narration. It was good enough. But it took me a chapter or so to adapt to the voices and accents as I had just been listening to the magnificent Stephen Fry read the Harry Potter series. And for me, narration doesn't get much better than that. But soon enough I had adjusted to the new narrators.

I loved this book! I've listened to it 3 times in 48 hours. Preformance great.

I love how emotions are described in this book!! Its such a refreshing and real look at them.

Voice acting is superb and it’s utter perfection. They way emotions are described makes the experience visceral and a truly immersive experience

A MUST for Bright Sessions Lovers

Even if you haven't listened to the Bright Sessions (highly recommend that too), it's still a great LGBTQ book for young adults.

at some points the voice acting was awkward, but once you know the characters.... it makes so much sense and yass

I weld all day and its hot and miserable and for the past two days listening to this book i felt like i was falling in love again too. My fiancé and i are going on 3 years and this book reminded me of the butterflies we all chase. Please don’t disappear, you are an amazing writer and i hope for so much more from you. I listened to the bright sessions and felt for caleb and adam then but this really gave me the back story i needed. I cant wait to hear from all of you again. Keep it up.

The book was hands-down incredible... until about 90% in. Then it just fizzled out. The characters got all this scary information, and absolutely nothing happened or was even done about it. It was so weird and such a missed opportunity. It was kind of like the author just got bored and said, “oh well, I’ll just wrap it up as quickly as possible with no resolution.” Kind of a bummer.

Enjoyed this, the only draw back is how short it was. Look forward to more Bright session novels and to learn more about this universe that Shippen has created. I fell in love with the characters and kept wanting to know more. This is worth the read/listen.

I loved it it took a while to get to the amazing part but once it did it was great and then it just finished abruptly I felt like this was just the tip of the iceberg!

I was a big fan of the podcast The Bright Sessions, which this book is a spinoff of. So I had to preorder this and listen right when it came out. Did not disappoint. It’s a cute romance mixed with coming-of-age superpowers! Great narrators for the two characters.