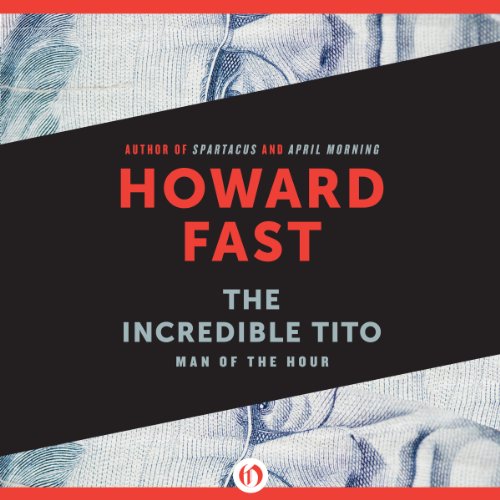 With his cerebral performance, narrator Christopher Kipiniak provides an impressively dramatic tone to this biography of Joseph Broz Tito, the first president of Yugoslavia. At the time of the book's publication in 1944, a united Yugoslavia didn't even exist, and Tito was still leading a force of resistance fighters in the Balkans against the encroaching Nazis. Kipiniak gives Tito a suitably heroic and muscular voice, and listeners will have no problem clearly picturing this man who the political world believed would unite the East and the West against fascism.

Fast's fascinating biography of Joseph Broz, known to the world as Tito, including his rise to power and his remarkable stand against fascism

The world was mired in the Second World War when Howard Fast wrote The Incredible Tito. Upon the book's publication in 1944, there was still no united Yugoslavia, the Axis controlled most of Europe, and D-Day was only in the planning stages. In the Balkans, Tito was a beacon of hope against the advancing Nazis. He led a force of resistance fighters that bedeviled the occupying German army throughout Slavic regions and empowered people's committees to act as local government in all liberated areas. For observers on the political left, Tito seemed uniquely poised to unite the East and West against fascism - once and for all.

What listeners say about The Incredible Tito