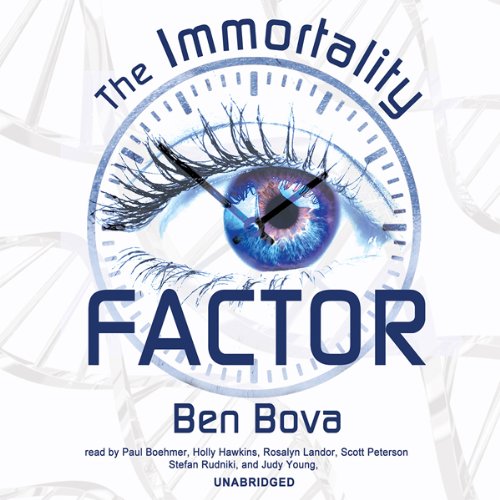 In this provocative, gripping, and startling novel, best-selling author Ben Bova delivers a knockout listen with his trademark blend of cutting-edge science and unrelenting suspense.

Some see stem-cell research as mankind’s greatest scientific breakthrough; others, a blasphemous attempt to play God. Suddenly, the possibility of immortality exists.Two brothers, both doctors, stand on opposite sides of the controversy. To Arthur Marshak, his work is a momentous gift to humanity. To Jesse Marshak, it is a curse. And between them stands a beautiful, remarkable woman that both brothers will do anything to save.

Somehow, before it’s too late, Arthur and Jesse must bridge the gap that divides them… on an issue that could mean nothing less than life or death for millions.

What listeners say about The Immortality Factor

An intelligent exploration of the politics of science and the human heart
It seems I need at least 15 words for my review.

This book was a bit of a departure for me - I’m usually entrenched in the Stephen King/Space opera bracket.

The story is very interesting and thought provoking, though it does occasionally move quite slowly.

I am a bit fan of multi-narrated books though, and the performance was very engaging.

I don't want to live forever with these characters

I picked up this book hoping for both a good story and some thought provoking perspectives on the subject of stem cell research and genetic engineering. At first I thought that was exactly what I was going to get. The book puts a specific application of stem cell research on trial, perfectly setting the scene for a bevy of characters to present varied viewpoints. Chapters are told from the perspective of different characters and the same scene can be replayed two or three times giving you an insight into what each character is thinking. It also relies heavily on flashbacks to provide the backstory of each character and how they came to hold the beliefs they do. In principle, that’s the perfect set up.

This leads us to the second, much larger problem. Whilst there are some interesting arguments presented, I’ve never seen (well, heard in this case) a cast who are so self-centred, whiney and unappealing. Many of the discussions come across more as the jealous bickering of five year olds in the playground than of intelligent men and women of science.

The kindest and most relatable character was a chimpanzee that sadly never had a chapter told from his perspective. And given this book is partly set in a research lab, let’s just say it’s not much fun being a chimpanzee. Or a rat. Or in fact any kind of animal.

In the end I really didn’t care who won the argument. I just wanted the argument to be over. At times I yearned to bash their heads together and make them see sense. I was practically shouting at them due to their pig-headedness – and believe me, that kind of behaviour gets you some very strange looks when you are on a train.

Top all that off with an ending that leaves you feeling like the nearly 17 hours leading up to that point were completely pointless as there are no real consequences to the outcome and I was left feeling deflated by the whole experience.

Overall it's a shame as the book is well narrated and the scientific discussions are interesting and do make you think about where we are headed. But honestly, if immortality means living with characters like these I’ll be happy with my three score years and ten.

What a wow, sexy deep voice of narrator. Variable voice overs completely believable, couldn't stop listening, like a drug, a very possible if not futuristic storyline.

Never Really Got Into It

Unusual format with the story told from the varying perspectives of each on the main characters.
The storyline itself was occasionally interesting but never gripping.