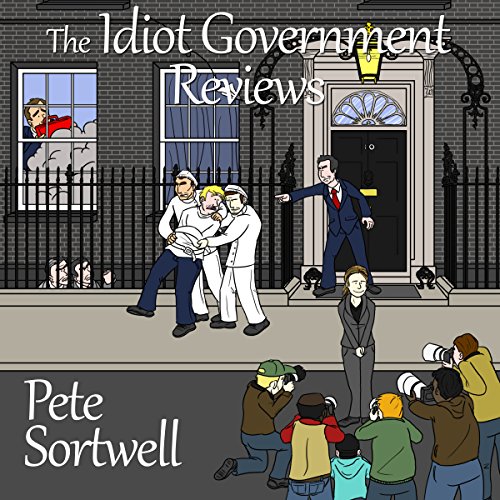 We've all seen the news over the last few years, watching in wonder and disbelief at the situations the people entrusted to run the country get themselves into and then proceed to lie their way out of. Just imagine--and this won't be hard--that they were so stupid they wrote reviews of the items that got them into or out of their latest bits of trouble and posted them online.

Ted Williebond is angry, not only at having to settle for running the opposition but also for the bullying he had to endure at school by Cameron Davies and Gary Osburn, who now run the government and don't mind pointing that out to Ted every time they see him. Join Ted as he foolishly leaves reviews of such items as Silly String, vodka, and thick curtains as he tries his hardest to bring down the coalition. On the other side of the fence, we've got Daniel Dangly, a foolhardy, old-school politician from Southamptonshire who, try as he might, cannot outrun the press, who seem to stalk him for easy stories; and Elouise Munch, a career girl more concerned about who's defaced her designer handbag than the people in her constituency.

Neither Cameron Davies nor Ted Williebond runs the show, though; in fact Betty Rivers, the CEO of Information Inc., does. It can't work out well, can it? Welcome to The Idiot Government Reviews.

What listeners say about The Idiot Government Reviews

Boring to say the least

If About US Politicians 5* - I Didn't Know Players


This is based in the UK so much of the humor was lost on me. If it has been about the idiot American government I probably would've been in stitches the whole time.

Peter is a an extraordinarily funny writer. He is also very generous, giving me NINE books to listen to in exchange for my opinions, including this review.

I really enjoyed Dating in the Dark and Bride and Gloom- in that order.

It is Bridget Jones' style but from the man's perspective. That is a compliment.

Credit worthy/$: Not for me, BUT I am sure that those in the UK can appreciate it more.

Thank you for reading my review. If you found it to be helpful please select yes right below this text.

This book is very funny. This is a comedy about different quips of items for sale and short stories done in multiple voices. The material is refreshingly funny. My favorite (if I was to pick one) was the man running in a political race / also a real race. Along with the silly string & six packs.

Pete Sortwell, the author has his own style when it comes to comedy and it seems like he never runs out of material. He is witty & funny & makes me laugh my bottom off! His narrator, Tony Scheinman did a good job delivering these funny lines to us with so many different voices, which only added to the charm. Great job guys!

What did you love best about The Idiot Government Reviews?

Daniel Dangly getting caught blow drying his wank in the back seat of his car. Just ohm hilarious!

What was one of the most memorable moments of The Idiot Government Reviews?

The one mentioned above, and Esther's smelly handbag.

All of the above and the tripod stool, Japanese tourist incident.

Most of the book moved me to laugh so hard I nearly peed!

Just that this was super funny and the narrator did a great job!

If you’ve listened to books by Pete Sortwell before, how does this one compare?

This is not one of my favourite Pete Sortwell books. The idea for and format for the book were good but the content just wasn't as good as other work I have experienced.

Have you listened to any of Tony Scheinman’s other performances before? How does this one compare?

This is my first experience with Tony Scheinman's work and found him to be very good.

This was an amusing set of reviews by government officials. It didn't have me in stitches but I wasn't bored.

I received a copy of this Audiobook in exchange for an honest review.

I don't always enjoy audio books but this was great content, well read and the different voices helped remind me of the different fictitious characters in the shady government reviews.
Nice one Pete. I look forward to listening to some more soon.