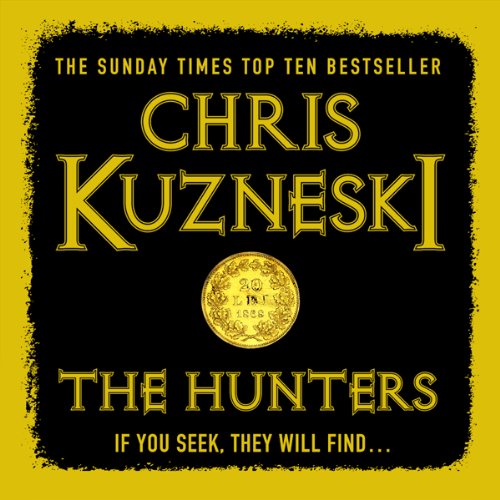 By: Chris Kuzneski
Narrated by: Dudley Hinton
Try for £0.00

The first in a brand-new series from the international best-seller Chris Kuzneski.

The Hunters: Financed by a billionaire philanthropist, this elite team - an ex-soldier, an historian, a computer whiz, a weapons expert, and a thief - is tasked with finding the world's most legendary treasures.

The mission: Fearing a German victory in WWI, the Romanian government signed a deal with Russia to guarantee the safety of the country's treasures.

In 1916, two trains full of gold and the most precious possessions of the Romanian state - paintings, jewellery, and ancient artefacts - were sent to the underground vaults of the Kremlin. But in the turmoil of war, the treasure was scattered - and lost. Almost a century later, the haul is valued at over 3.5 billion dollars. Despite hundreds of attempts to find it, its location has remained a mystery...until now. Can the Hunters find the treasure and succeed where all others have failed?

What listeners say about The Hunters

a gripping start to a new series

Where does The Hunters rank among all the audiobooks you’ve listened to so far?

this is possibly the best audiobook I have ever heard, and definitely the best Chris Kuzneski novel.

I loved the author's ability to shift the opinions of the listeners with regards to the characters again and again, without ever getting lost or confused. And the level of research which has clearly gone into the story.

I love any scene in which the abilities of the main characters come together in beautiful harmony with spectacular results.

The book will make you experience every emotion possible, as you are taken through comedy, betrayal, love and hate.

I would recommend this book to anyone who likes a well researched gripping novel, that is also filled with comedy and black humour.

Well worth listening to as it's fast paced adventure from start to finish will defiantly get some more.

really loved the book plenty of action from start to finish,cant wait to read the next one in the series

As it went along I listened in longer sittings. Could get hooked on series.

poor story and even worse narration. wont buy any more From this author. wasted credit.

No sophistication here, in neither narrative or plot. Fast paced action story littered with cliches and stereotypes. Painful at times.

compelling Story that keeps your interest.

loved it especially the twists and turns! full of intrigue. great read. Lots of historical and legends.

I have never read anything by Chris Kuzneski before but The Hunters had been recommended to me a number of times. I figured I'd give it a shot and listen to the audiobook.
What a thrill ride, edge of your seat action, fun and interesting characters and a historical mystery. The chapters are short and it's easy to get into the story. If you like a dose of humour with your action, definitely give this book a try. I had moments of actually laughing out loud.
Dudley Hinton really immerses the listener in the action of the story, making the unbelievable, believable with his performance. I enjoyed it thoroughly.