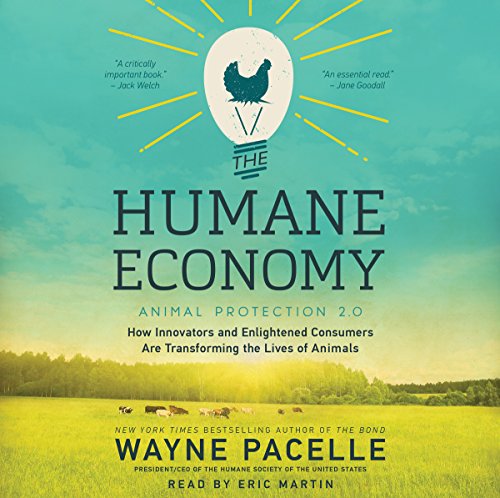 How Innovators and Enlightened Consumers Are Transforming the Lives of Animals
By: Wayne Pacelle
Narrated by: Eric Jason Martin
Length: 12 hrs and 18 mins
Categories: Non-fiction, Social Sciences
5 out of 5 stars 5.0 (1 rating)

A major new exploration of the economics of animal exploitation and a practical road map for how we can use the marketplace to promote the welfare of all living creatures from the renowned animal-rights advocate Wayne Pacelle, president and CEO of the Humane Society of the United States and New York Times best-selling author of The Bond.

In the mid-19th century, New Bedford, Massachusetts, was the whaling capital of the world. A half gallon of sperm oil cost approximately $1,400 in today's dollars, and whale populations were hunted to near extinction for profit. But with the advent of fossil fuels, the whaling industry collapsed, and today the area around New Bedford is instead known as one of the best places in the world for whale watching.

This transformation is emblematic of a new sort of economic revolution, one that has the power to transform the future of animal welfare. In The Humane Economy, Wayne Pacelle, president and CEO of the Humane Society of the United States, explores how our everyday economic decisions impact the survival and well-being of animals and how we can make choices that better support them.

Though most of us have never harpooned a sea creature, clubbed a seal, or killed an animal for profit, we are all part of an interconnected web that has a tremendous impact on animal welfare, and the decisions we make - whether supporting local, not industrial, farming; adopting a rescue dog or a shelter animal instead of one from a "puppy mill"; avoiding products that compromise the habitats of wild species; or even seeing Cirque du Soleil instead of Ringling Brothers - do matter.

The Humane Economy shows us how what we do every day as consumers can benefit animals, the environment, and human society and why these decisions can make economic sense as well.

"Eric Martin gives a resonant narration to this important audiobook.... Martin's thoughtful phrasing conveys every nuance and all of the urgency in the author's message." ( AudioFile)

For all lovers of animals--even the most sensitive

As with many animal lovers out there, I was ambivalent about purchasing this book, fearing a litany of disturbing and horrifying stories. I took the chance and have no regrets at all.

This book is expertly written and in a style very easy to listen to, and while his love of animals shines through, it is a rational 'position paper' using the latest research findings and worldwide events as examples, and covering a very road range of issues pertaining to our sharing the planet, and our lives, with all types of animals.

Excellent also for those with interests in economics of doing the right thing--shows that individual decisions in purchasing, and social media, can and do make a difference, and also better equips the reader to respond to statements by some that it is too expensive or hopeless to do the right thing.

Couldn't put it down. Kudos to the author.

What did you love best about The Humane Economy?

Good content, horrible narrator. He makes such loud breathing noise, it was very distracting to listen to.

Useful info, well written, but the breaths weren't edited out. Between almost every sentence, there's a distinct loud deep easily editable breath. It got really bad in chapter 3, and by chapter 5 I just couldn't listen anymore and had to return it. This is a huge lapse in audio quality.

This was a very educational listen, showing how voting with your dollars can be as or more important than voting at the polls. My favorite part was how eco tourism is overtaking trophy hunting in Africa, as the former is many many times more profitable than the latter.

It took me a while to get used to the narrator's voice, which I found very dramatic. but once I did, I didn't mind it at all.

Could not get past a few chapters

I am not one to not finish a book. The kind of writing here is where I believe the term "humane washing" really comes from. Inexcusable to treat this subject with such centering of human experience and profits. Shame on you Wayne. You and Tenple Grandon have a lot in common. Helping people continue to profit off the misery of billions of animals by pretending they are doing something "humane". When you use words like "livestock" and are not referring to something others say, you are perpetuating suffering.

Not using sentient beings is the way forward

makes so much sense. but what doesn't sit with me is the animal welfare part, why improve the horrible conditions of animal when they are going to be killed anyway. only to make the consumer feel better. why not concentrate on getting the animals off the plates of the consumers.
as a whole a good book with some useful information

A must read for all. Many facts were presented that support the Humane changes regardless of an individuals beliefs

I was horrified at our history with our Animal neighbours and heartened to hear of the changes coming down the pipeline. Puppy Mills, animals in circuses, movies and poachers. Quite the education.

What made the experience of listening to The Humane Economy the most enjoyable?

thank you I learned a lot