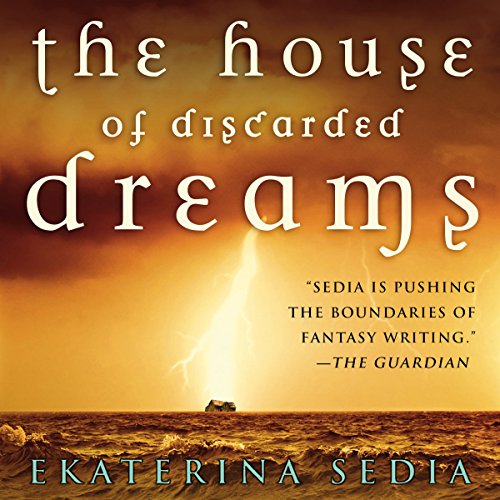 The House of Discarded Dreams

Book lovers who enjoy fantasy will jump with both feet into the experience of listening to Ekaterina Sedia’s The House of Discarded Dreams, creatively performed by Robin Miles. While the basis of the story is of Vimbai, a Zimbabwean daughter of immigrants to the United States, finding an identity for herself that is separate from her parents and her African heritage, the story is that and so much more.

Miles adeptly captures the impatience and irritation of 20-year-old Vimbai, an only child who would like nothing more than to live an independent life. Miles easily transitions between the terribly irked Vimbai and her parents, who are grappling with their own identities  no longer Africans, though not quite Americans. Vimbai’s mother, a university instructor of Africana Studies, indignantly perceives condescension towards all that is African in her American experiences, while Vimbai’s father is a nurse beleaguered by the reality that nothing he can say or do will mollify his wife’s dissatisfaction with life.

When Vimbai attempts a separation from her parents by becoming the third roommate in a house by the shore, The House of Discarded Dreams spins off into a world that may or may not be of Vimbai’s creation. Nevertheless, Miles excels as she takes on the characterizations of Vimbai’s roommates, world-weary Maya and Felix, a loopy fellow with wild, dark hair that is, truly, a universe unto itself. Miles gives life to a croaky (from being stuck in the phone lines) yet highly rambunctious Psychic Energy Baby; a slippery, manipulative Manfish/catfish; but, most compellingly, to Vimbai’s Shona grandmother who has returned from the afterlife to guide Vimbai through the journey launched into motion with Vimbai’s presence in the house. Through Miles, Vimbai’s grandmother is a mellifluous, loving, African elder who reveals the layers in Shona legends Vimbai had been too young to grasp when her grandmother was alive. The tales not only explain the fantasy world Vimbai, Maya, and Felix temporarily inhabit but also begin to illuminate, for Vimbai, the unease and sadness with which her parents view their lives in America. As The House of Discarded Dreams progresses, Vimbai begins to accept the depth to which she is and will always remain African.

Miles’s ability to voice convincingly so many fantastical characters allows listeners to lose themselves in the enchanted world Ekaterina Sedia has created in The House of Discarded Dreams. Tying together one magical scene after another, her narration encourages all to journey alongside Vimbai as she navigates her way through a shape-shifting beach house with other-worldly inhabitants. Through Miles’s extraordinary skills Vimbai and audiobook listeners are entertained by a wise Zimbabwean grandmother who cares enough not only to give us important life lessons through Shona folktales, but also to do the dirty dishes as well. Carole Chouinard

Trying to escape her embarrassing immigrant mother, Vimbai moves into a dilapidated house in the dunes and discovers that one of her new roommates has a pocket universe instead of hair, there's a psychic energy baby living in the telephone wires, and her dead Zimbabwean grandmother is doing dishes in the kitchen. When the house gets lost at sea and creatures of African urban legends all but take it over, Vimbai turns to horseshoe crabs in the ocean to ask for their help in getting home to New Jersey.

"[A] quirky, joyous fantasy....[T]he overall effect is dreamily compelling rather than farcical, as Sedia shows how competing natural and supernatural worldviews can enrich each other." (Publishers Weekly)
“Robin Miles’s steady, easy presentation of the mundane details of daily life creates a subtle contrast with the bizarre events unfolding…Miles bestows a sense of the ordinary that helps the story and characters stay grounded.” (AudioFile)

What listeners say about The House of Discarded Dreams

No. Narrator doesn't effectively convey what is an odd but sort of interesting narrative.Some good accents, but otherwise weak.

The story itself seems to meander, although I struggled to follow the story in spite of the narrator, so I suspect it was better than I was able to determine.

The African accents of the grandmother and parents were attractive, but the voices she used for Maya and Felix were a turn off. Mostly though, what was frustrating was trying to follow the story in spite of the narrator. I could hear the words trying to convey ideas that the narrator did not help me understand - especially on an emotional level. I felt like I was on the fence about whether to keep listening throughout the book, and unlike other audiobooks, I was not eager to get back to listening or loathe to stop. I pressed on and got to the end, but it was an effort.

Was The House of Discarded Dreams worth the listening time?

It was a shame the narrator wasn't better. I would have liked to hear what someone really capable could have done with it.