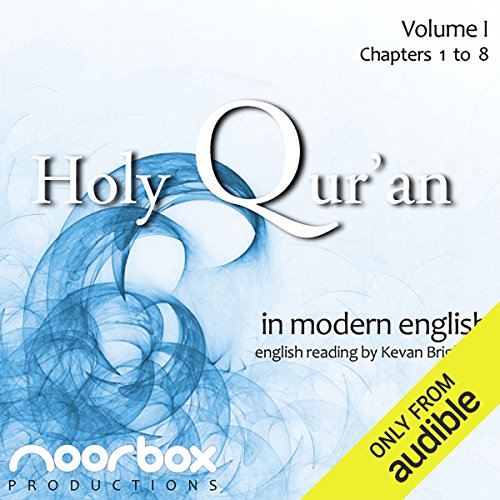 By: Noorbox Productions
Narrated by: Kevan Brighting
Try for £0.00

To understand the complete meaning and spiritual messages, we recommend that listeners learn Arabic and read in the language of the Holy Qur'an. The Holy Qur'an is best learned with teachers and study circles.

This production in the English language is only an interpretation of the Arabic.

What listeners say about The Holy Qur'an

Really Worthy to hear all the chapters and each lines. Really modern languages makes easy to understand

I love this version of the Holy Quran. It's easy to follow during Ramadan, reading each Juz each day. This is my third year.

Enlighten to say the least, these messages are clear and powerful, so much of what we can learn about ourselves, the world and hereafter are all in the Holy Quran

Alhumdolilla, a clear concise English translation, easy to understand and a great way of understanding the Quran

Beautiful. An all encompassing message of guidance

A must read. Majestic, magnificent. Spiritual guidance and healing to be found within. Well, what are you waiting for?

Too modern, over simplistic translation

I was disappointed with this modern translation. The reading felt like a summary of the scriptures rather than a close translation. The narration sounded harsh and didn't flow. In Arabic it is beautiful to listen too, this definitely isn't.

Most translations of the Qur'an are either translated too literally and/or narrated by nonnative English speakers, both of which make it difficult to follow or listen to. That is not the case here. The narrator is clear and professional and easy to follow, and the interpretive translation also makes it a little easier to understand. Strict literalists may not agree with some of the English wording, but anyone wanting to understand Islam through an English translation of the Qur'an will be well-served by this audiobook.

Praised be ALLAH The Mighty.

As a speaker of the truth, I welcome the words and teaching of the Holy Quran. Thank You ALLAH, for these teachings and Your love.

Good but not acurate!

If you could sum up The Holy Qur'an in three words, what would they be?

It's well written and performed but it's not a good translation. It's okay for getting a general sense of the Qur'an but there are important points (attitudes towards violence, other religions, etc.) which are confusing in this translation. And some less sensational issues that are more clearly wrong.

It does capture some of the beauty of the Qur'an.

Not a bad starting place for an English overview. Combined with _Muhammad_ by Martin Lings but don't take it as truly representing Islamic beliefs.

Easy on the ears...voice was animated enough to bring the stories to life. Worth every cent or credit!

Best English Reading of Quran I have found

This isn't only the best english reading of the Quran I have found, it is kind of the only one, at least the only decent one. Worth listening if you have an interest in Islam and western religions, certainly has some entertaining and informative bits. Overall though probably wouldn't recommend the audiobook, the book is quite repetitive and hard to follow. Probably better to read if you are really interested in it. As far as the 'story' goes it has some interesting 'historical' information and many sayings and laws. Its quite short compared to the bible, and actually has many similarities as well, such as certain stories and such. Generally the message is the same as the old testament. It does emphasize the bad things that will happen to you if you don't follow the rules quite more significantly than the bible though, such as hell. I guess they had figured out by that time it was a good way to get people to do what you want.

Great reading of the Holy Qur'an

Would you listen to The Holy Qur'an again? Why?

I plan on listening again, at the latest next month of Ramadan, but likely before that on my commutes to work.

Feel like more us should consider reading and understanding. Different and similar to the Bible.

It’s just beautiful. Gives you much more of an understanding if you were chasing the knowledge & wisdom of the religion

All people should read or listen to the text of the soon to be largest religion in the world. They can gain a lot of perspective about the fundamentals of Islam. Without this understanding, having discussions about religion, politics, and society are very limited. Especially people that are not indoctrinated into the religion, like myself, will benefit by having this experiential knowledge, even if you may find it troubling or uncomfortable.

I used the Pickthall translation to follow along and it was easy going. Pickthall's translation is much briefer than the Hilali/Muhsin translation the narrator is reading.

The discrepancies highlighted the abundance of interpretive parenthetical additions in the narrator's text. These additions were interesting, but I prefer Pickthall's minimalistic translation.