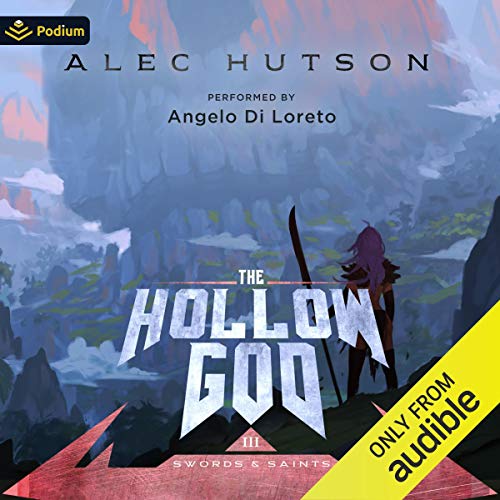 By: Alec Hutson
Narrated by: Angelo Di Loreto
Try for £0.00

The epic conclusion to the Swords and Saints trilogy.

In a ruined temple on a dying world, a man without a past promised the Red Sword of her tribe that he would protect her daughter...and then he lost her.

Flung into a very different world, Talin had been forced to navigate this strange new realm as he searched for the girl Valyra. His journey had taken him from Ysala to the Twilight Empire, from the golden grasslands where monsters prowled to the haunted undercity of Zim. He had held true to his word, finally rescuing her from the Shriven, who wished to use her sorcery to heal the paths between the worlds.

But after a betrayal by one of his companions, she is now in the clutches of the mysterious Contessa, and he must once again return to the City of Masks. Only now, the fate of the world hangs in the balance.

What listeners say about The Hollow God

Damn, a fantastic conclusion to the brilliant Swords and Saints series, if you love a good fantasy story with Demigods, Saints and mortal Heroes and an enemy looking to destroy everything that is good, then look no no further and check out this fully finished series, After Talin made a promise to the to a dying woman that he would protect her daughter, losing her and ending up in new world lost and enslaved, he was desperate to find her, after succeeding in her rescue, Talin suffering from amnesia finds out he has an older brother and finds out his real name and man is it a mind bender, we find out who is behind the attacks and pushing the Shriven to destroy their lives, the fate of their worlds is in his hands, with all the realms linked by door ways the Shriven are able to move about, a hive like minded creatures, his mission is to kill the Queen and stop their threat and destruction, absolutley brilliant worldbuilding, the plot and setting are so intriguing, an excellent array of characters that you will connect to right away, Alec Hutson has created a world where you can get lost in and with the narration by Angelo Di Loreto just tops of a great out and out read, highly recommend....😁

I did like the ending of the series but I wish our H could go more than a day or two without getting captured.

Loved the pacing of the series. Great characters. Overall I enjoyed the series. I’m happy the not so dark ending I thought would come didn’t.