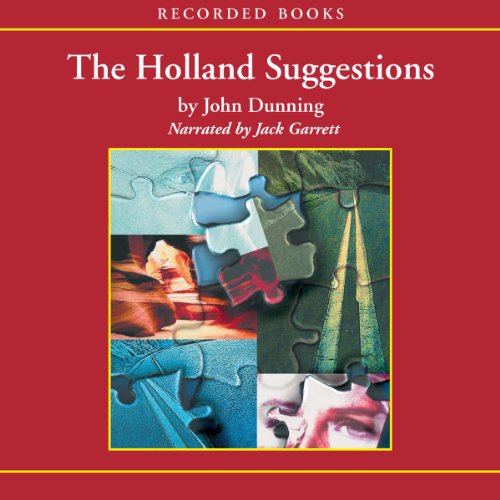 Nationally best-selling author John Dunning has attracted millions of fans with his mysteries including The Bookman's Wake, a New York Times Notable Book of the Year and Deadline, an Edgar Allan Poe Award nominee.

In The Holland Suggestions, contractor Jim Ryan knows there is a chapter missing from his life. His dreams show places that are absolutely familiar, yet he can't name.

One day, he receives an anonymous photograph of a mountain cave - one that may hold the key to his past. Now he is headed up into the Colorado Rockies, hoping to find this landmark that has etched itself so clearly into his mind.

Through Dunning's flair for creating atmosphere and suspense, Jim Ryan's search becomes a a gripping tale of buried secrets and murder.

As present and past fuse into one dark question, The Holland Suggestions holds the listener in a grip made all the more powerful by Jack Garrett's dramatic narration.

What listeners say about The Holland Suggestions

Dunning is one of our favorite authors. This book is one of his early works, and the storyline is great, but he belabors the tension in some of the scenes, so not flawless. Would still highly recommend!

The story was sound enough but ...

I'm not going to make it through this book

I've tried to listen to this book twice on long commutes, shut it off or fast forwarded both times. I'm hoping it gets better - can't sell my audio copy in a garage sale.