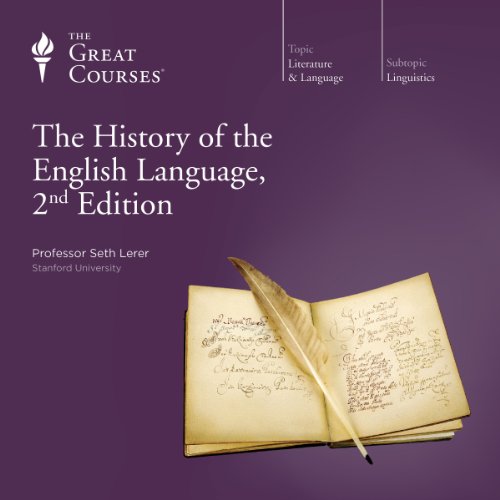 The History of the English Language, 2nd Edition

This course offers an overview of the English language that is literary, historical, cultural, political, and scientific in its scope and designed to give you greater insight into the written and spoken word.The lectures provide a thorough understanding of the history of the English language - from its origins as a dialect of the Germanic-speaking peoples through the literary and cultural documents of its 1,500-year span to the state of American speech today.

Professor Lerer defines concepts by illustrating them with copious examples. He often speaks in the dialect appropriate to each lecture - be it Old English, Chaucer’s Middle English, or the colloquial style of Mark Twain’s most unforgettable characters.

What listeners say about The History of the English Language, 2nd Edition

Professor Lerer may rub you the wrong way a little when you first hear his voice; he did me.

I had that reaction, I think, because he enunciates each word with such excruciating clarity and exactness that it becomes at times distracting from the actual content of the lecture.

It was only a little further into the course, however, that this very trouble, that is the shifting of focus between the meaning of the sentences/sections/thoughts and the individual words (free from direct context, highlighted by the intentionality with which he executes them) became a source of joy and reflection that added tremendously to the experience. I'm sure this was one of his goals in constructing these polished lectures.

His apparently deep knowledge of the pronunciation of old and middle English, including the various dialects, makes listening to his readings of Chaucer, Sir Gawain and the Green Knight, Beowulf, Cadmon and even Shakespeare (reconstructed to sound as it would have if you were hearing it circa 1600) really thrilling.

I'm going to find his other courses after reviewing this one. Highly recommended!

I listened to the first version of this course on cassette tapes way back in the day and found it truly fascinating. The second version contains much of the original material, and it was fun to be reminded of the things I had forgotten. It is a testament to the original course that I also remembered quite a lot! The new material at the end brings the history of English up to date by covering the ways in which new technologies are transforming the language. Professor Lerer presents the lectures at a perfect pace, uses great examples to illustrate abstract concepts, and clearly loves this material. His enthusiasm is infectious. Highly recommended as a way to learn not only the history of English but also some widely applicable principles of philology and linguistics.

Not as good as most Great Courses I've listened to

Seth Lerer knows his topic. Unfortunately, his lectures don't convey the history of the English language. Lerer touches on linguistic theory and anecdotes to advance the course but he doesn't communicate the "history" of the language. Lerer meanders over many topics but doesn't move from a beginning to an end.

Further, he is not as entertaining a lecturer as others at Great Courses who lecture about language, particularly John McWhorter. McWhorter on Audible - http://www.audible.com/search/ref=a_hp_tseft?advsearchKeywords=john+mcwhorter&filterby=field-keywords&sprefixRefmarker=nb_sb_ss_i_0_8&sprefix=john+mcw

Would you listen to The History of the English Language, 2nd Edition again? Why?

I listened to the entire course. Professor Lerer is very learned and prepares well, but it was more information than I really wanted to learn. This is a very detailed history.

Yes. This was my third course.

Good, But Could Be Better

This course is very interesting, although it could be better. The first two parts of the book are excellent with a wealth of historical information about the historical development of the English language going, well, back to the beginning. Really fascinating, and I felt like I learned a lot.

When the book gets to the later stages, however, it slips a bit. The professor lapses into more than a little political correctness, which is probably not surprising given his background. If you can take it or leave it, the discussion is still interesting.

The professor is not a bad lecturer, but he has one incredibly irritating habit: He says "if you like" all the time. It becomes glaringly obvious, especially given the length of the recording. Maybe the professor can fix this in the third edition.

Another irritation--although certainly not the professor's fault--is the trumpet music announcing each new chapter along with the fake applause (which also closes each chapter). Straight out of 1950s sound effects. Just plain awful and prevalent in the "Great Courses." But, fortunately, a small part of the recording.

What did you love best about The History of the English Language, 2nd Edition?

The historical etymologies and the traced evolution of English were a delight to learn about.

What was one of the most memorable moments of The History of the English Language, 2nd Edition?

If the words "if," "you," and "like" were suddenly deleted from Professor Lerer's vocabulary. He says it at least two to three times each lesson, and you WILL notice. In fact, in the lesson I just listened to, he said it twice in one sentence.

Apart from the "If you like"s being really frustrating, there were two things that got to me. The pronunciations of the rare French readings made me cry as a French speaker, and every once in a while Professor Lerer would say things that were not quite right that I had already known beforehand as an amateur linguist.Everything else was great and a delight to listen to.

History in a nifty Package

I thoroughly enjoyed learning the history of the English language. It was comprehensive and packed with history. The instructor speaks fluent Old English, Middle English, and modern English. He also has a firm grasp of all English dialects and accents. I enjoyed his voice, especially when he spoke in Old English. He made it clear how to translate older forms of English and why and when the pronunciations changed. I found this audio course riveting and would listen to it again. If you like history, you will love this course.

What made the experience of listening to The History of the English Language, 2nd Edition the most enjoyable?

The information is, for the most part, superb.

What other book might you compare The History of the English Language, 2nd Edition to and why?

Both in the same subject, both far more enjoyable listens.

Seth Lerer makes William Shatner look like an absolute master of oratory performance. There's strong emphasis on just about every other word and strange pauses in odd places. At one point Lerer talked about "The study. OF. English. The study. OF. Language." and it was just odd. Why do you need to hit the word "of" that hard? Ever? My roommate overheard the course and described it as a "roller coaster of words." I'm pretty sure he was paid to say "ifyoulike" and "You will recall. From my previous lecture." at least 3 times per lecture (half an hour each).

I've never been so bored listening to something on a subject that I'm so interested in. I'M SURE HE'S A NICE GUY, but Lerer comes off as pompous and pretentious and I reeeeaaaaally wished he would just talk to me instead of orate at me. I was so distracted by the way he lectured that I missed large chunks of what he was actually saying. For the last 8 hours or so I was just waiting for the book to die. I about cried with joy when I finally made it to the end.

The sad part is that the information is largely amazing and I would like very much to go back and re-listen to the bits I missed. But I just can't. I don't hate myself enough to go through that. I'm going to have to return this one.

Listen to the sample and realize that this lecture series is 18 and a half straight hours of that. Exactly that. If you can handle that for EIGHTEEN HOURS.... well, more power to ya, I guess.

I wouldn't. Why would you do that? That film would be terrible. The tag line would be "This film is terrible."

As I've mentioned, the information in this is largely amazing. Just absolutely fantastic. However, Lerer is very much a literature professor and not so much a linguist. That's not to say that he hasn't thoroughly researched the linguistic aspects of this series. But he does hit the literature side pretty hard.

He also does that thing that literature teachers do. You know the thing. "The shadows in this scene represent the hero's insecurities and deep seated fears of reproach! Notice how he begins this sentence here and the one 17 chapters later with the same letter as if to draw the reader's attention to character x's inner monologue from chapter 3!!" And you just have to sit there thinking, "How do you know this? The author died - relatively unknown - several centuries ago. Did someone ask him? Did he leave a detailed explanation and criticism of his own work? Maybe the shadows just mean that the room was fucking dark."

A criticism I've seen in other reviews is that this series is "boring" because it's "too technical" and "not really for the layperson."

It's a lecture series. If you wouldn't be interested in taking a college level course on this topic (because that's what this *is,* after all), don't listen to this lecture series. It is technical, yes. You do not, however, need any prior knowledge to understand the information given. It certainly helps, as it would in any course on any subject. But it's not necessary and I would argue that while it is technical, it isn't overly so.

Goes far beyond the history of English, dealing,as it does with the nature of language and the relationship between imagination, communication, and reality. This course will reward occasional replay.

This is one of the courses that I would feel truly impoverished if I had not taken the time to listen to it. So much eye opening material and I will truly never look at some words the same again.