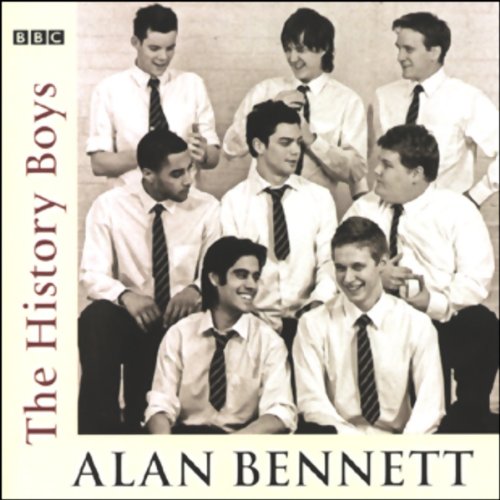 Richard Griffiths, Clive Merrison, and Frances de la Tour star as part of the National Theatre cast. At a boys' grammar school in Sheffield, eight boys are being coached for the Oxbridge entrance exams. It is the mid-eighties, and the main concern of the unruly bunch of bright sixth-formers is getting out, starting university and starting life.

At the heart of The History Boys are four characters, each with contrasting outlooks on teaching and school: Hector, an eccentric English teacher with no interest in exams; Irwin, a young supply teacher who sees history as "entertainment"; Mrs. Lintott, a traditionalist, who teaches "history, not histrionics"; and a Headmaster obsessed with results. Described as "the richest play Bennett has ever written" (Financial Times), staff-room rivalry and the anarchy of adolescence collide in an intensely moving and thought-provoking play.

Click here to see all the titles in our Alan Bennett collection.

Listen to our charming interview with Alan Bennett on the Audible.co.uk Podcast.

"A superb, life-enhancing play." (Guardian)
"Intensely moving as well as thought-provoking and funny." (Daily Telegraph)
"Bennett fans can enjoy the clever, dramatic construction and the author's hallmark comedy as the boys and teachers (from the original cast of Nicholas Hytner's National Theatre production) bandy ideas about history, philosophy, poetry, education and sex." (Sunday Times Audio Book of the Week)

What listeners say about The History Boys (Dramatised)

I had the great privilege of playing the part of Irwin once and this audio book helped me with all the lines and embedded my love for the story. it's a shame that Stephen Campbell More couldn't be in this audio book but all the rest of the cast are original. I love this play but what I love even more if that I discover something new and something funny each time I listen to it.

This radio adaptation was beautifully adapted from the original play with very few changes from the script so nothing is lost. Having the original cast, save for Irwin, was the perfect choice as all the actors created their characters and made them each special. I recommend this to anyone and everyone. A magnificent piece of writing.

This audio doesn't make sense.
One moment they're in the school
Next moment, one teacher's in a wheelchair in a ruin doing something for TV and then some previous schoolboy, Posner comes up and does what exactly? Tries to record him in secret..... so I guess we are in the future?
Next moment we are back in the school again and the plot continues as before - what are we to make of that?
Well, I assumed there was something wrong with the audio recording, as no other review mentions this jumble-tumble of time travel at all.
Totally confusing.

Loved it! Saw the film first so was able to picture the performers. Highlly recommended.

This has been adapted really well as a radio production especially as it features the original cast from the theatre production.

Downloaded because I am shortly to perform Irwin at a performance in Halifax next month. It's been an invaluable tool. Have listened to it LOTS!

I just love this. Bennett at his best, and superbly acted, directed, and produced. Couldn't be better.