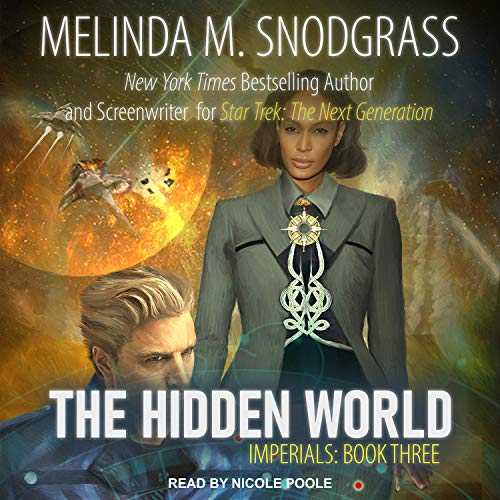 By: Melinda Snodgrass
Narrated by: Nicole Poole
Try for £0.00

Fourteen years have passed since he was framed for theft to cover up an imperial atrocity, and disgraced military officer Thracius "Tracy" Belmanor has built a new life for himself. Living under an assumed name as the captain of a small trading vessel crewed primarily by aliens, he and his crew engage in both legal and illegal deals just under the radar of the Solar League authorities.

At the other end of the social hierarchy, Princess Mercedes de Arango has her own problems - the major one being the lack of an heir. Meanwhile her philandering husband Boho Cullen has ably proved the problem isn't him. With rumors of a coup swirling around the throne, Mercedes makes the desperate decision to undertake a military campaign and gain her people's allegiance through a victory. But when things go badly wrong and her future lies in the hands of the man she betrayed, Tracy has a choice to make - can he ever forgive her?

What listeners say about The Hidden World

The narrator at times sounds like software reading from text but that didn't stop you from enjoying the book too much.

Oh my God, please give me the next book

Each of the books so far have had wonderful endings, this might be the best one. I loved seeing how the author took the original elements of the short story from Tracy‘s perspective, and turned it into this wonderful series of books. I can’t wait until the next one comes out.

Everyone feels so multi dimensional, and characters I was ready to hate at the beginning are people I can sympathize with and even respect in some cases now. It’s so hard to write a book with characters who deal with political intrigue and not make it like they are selling their souls. But she succeeds. The governments decisions are complex, and there are those who are neckdeep in conspiracies, and others who are truly trying to do their best even when they don’t have any good options to choose from. It’s so refreshing, and so good.

Also, I love seeing the way that sexuality is talked about. Like, any of the LGBT characters just make me smile. As a gay trans guy I don’t need the main character of a story to be LGBT for me to feel like there is adequate representation. I just like having an author acknowledge that there are people who live all kinds of lives and love in all kinds of ways. Especially when it is science-fiction, it just wouldn’t make sense for everyone to be cisgender and Straight. So, I’m so pleased with this tiny aspect of a wonderfully interesting universe.