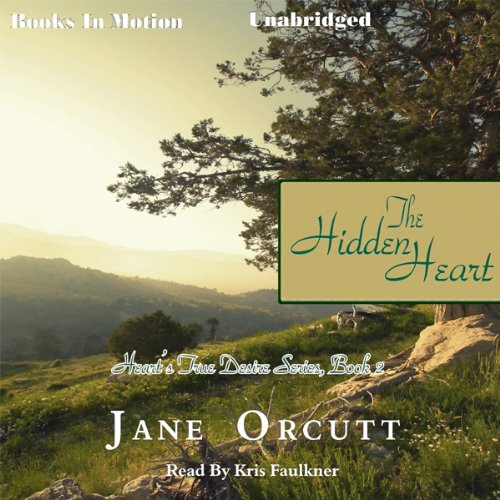 By: Jane Orcutt
Narrated by: Kris Faulkner
Try for £0.00

Seeking to leave her troubled past behind, nineteen-year-old Elizabeth Cameron decides to join a religious group in Belton, Texas, where she and her five-year-old Indian charge will be hidden from a cruel world. Former gunfighter and robber Caleb Martin will do anything for a governor's pardon, even if it means escorting an irritatingly prim young woman. After this assignment, he'll have his freedom. Yet along the way, he learns that there may be something he needs even more.

What listeners say about The Hidden Heart

Rape in answer to a prayer?

What disappointed you about The Hidden Heart?

I normally like the late Ms Orcutt's books but this is awful. When I listened to the sample the readers voice grated on the ear a little, but she wasn't required to read any character dialogue except two women. Now I know all her "voices" sound the same even the men and its not entertaining.However, even an excellent reading would not gloss over the author having her 13 year old heroine raped immediately after asking God to "use her" to bring Christianity to the native tribe who kidnapped her and who all watched the murder and rape of her mother and sister like they were watching TV. The man who rapes one of the heroine's relatives and then her is a favourite for tribal leadership, but the believe of the Cheyenne was that a man chosen as chief should demonstrate the following qualities, " an altruistic disposition and constantly giving to the poor" and that he should be a man of "wisdom, courage, kindness, generosity and even temper", their traditional law even states that although he shoukd be a proven warrior he should be disposed to peace. So not a murderous, thieving rapist then. The white settlers were enemies, but to rape and murder them in front of the women and children of the tribe? I find it hard to believe such behaviour would either be approved or that any one would think it demonstrated an " even tempered" man's behaviour.
The subsequent rape of the heroine, and its consequences are treated as if God intended them to be used to answer her prayer. I have seen this premise in other "Christian" books. Don't want this review to be about believes, but I dread some one reading this book who is a rape victim and then thinking God had them raped to teach them or someone else a lesson. God does not always protect his followers from evil, but he would never instigate it to answer a prayer! James 1:13 states “with evil things God cannot be tried, nor does he himself try anyone". So rape victims or those suffering from abuse never think it happened to you because God thought you deserved it or needed it in some way. As I said earlier I have read this idea in other American inspirational books and its just not based on sound scriptural teachings. How offensive and distressing these teachings may be to victims I dread to imagine. As a Christian myself I also see the terrible slander of God's character, but as I said earlier I don't want to dive into believes, so I'll say no more on that.

No "voices" everyone sounds the same.

If you could play editor, what scene or scenes would you have cut from The Hidden Heart?

The rape of the heroine, because of the theme that it was God's will and the strong indication ipby the writer that it occured in answer to her prayer.

This book is yet another reason I wish audible was more flexible on its returns policy. I didn't get far into it at all when the "gods will" rape happened and I could listen no further.