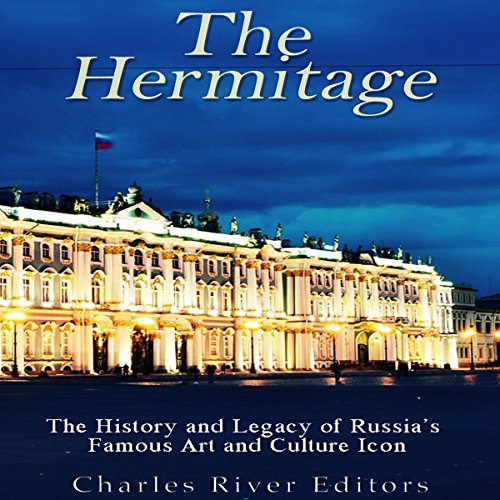 The History and Legacy of Russia's Famous Art and Culture Icon
By: Charles River Editors
Narrated by: Scott Clem
Length: 1 hr and 18 mins
Categories: History, European
1 out of 5 stars 1.0 (1 rating)

"If we wait for the moment when everything, absolutely everything, is ready, we shall never begin." (Ivan Turgenev, 19th century Russian novelist)

Before the 18th century, many believed that the "Tsardom of all Russia", which originated with the rather aptly named Ivan the Terrible, had contributed to the deceleration of the nation's progress. They fared no better in the eyes of the major powers of Europe at the time, who openly dismissed them as "barbarians" that ran a "backwards" society. It was clear that Russia was hopelessly stuck in a dark ages of sorts.

That was, until a new wave of monarchs, mainly Peter the Great and Empress Catherine II, reeled the country out of the dark and troubled waters of societal and cultural decay. Fond of the cultures to the west, Peter embraced technology, science, and the arts, developing a new educational system for his people and supporting a number of institutions of higher learning in Russia. He built a European-style capital at St. Petersburg and also established new ports and access to the Baltic Sea for the purposes of opening up trade with the west.

Catherine the Great came to power in the midst of the Enlightenment, which was flourishing in France and Britain. A known correspondent of Voltaire's, Catherine sought to modernize Russia and turn it into a force in its own right, creating a rich and cultured court at the same time. Over the course of nearly 35 years in power, Catherine ushered in the Russian Enlightenment and presided over a period of time known as the Golden Age of the Russian Empire.

Moreover, Catherine had an unmatched passion for the arts, and she began a private art collection that would eventually evolve into galleries upon galleries of historical treasures shipped in from all over the world. This fabled museum was none other than the Hermitage, located in the heart of Saint Petersburg, a city founded by the imperial empire's very own Peter the Great.

The Hermitage Museum: The History and Legacy of Russia's Famous Art and Culture Icon chronicles the history of the Hermitage and examines the multiple key figures that molded the Hermitage into the phenomenon it has since become. You will learn about the Hermitage like never before.