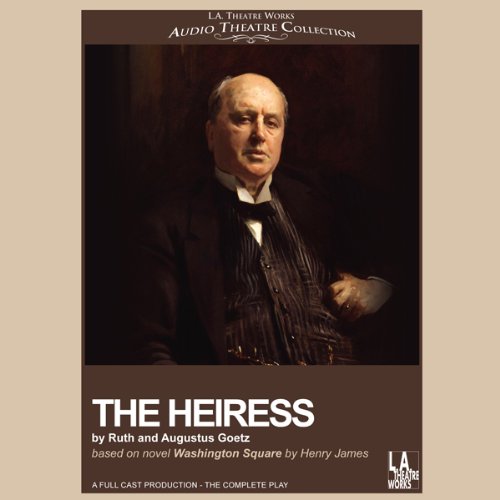 Based on the novel Washington Square, The Heiress is a play about love, manipulation, and the power of money. L.A. Theatre Works' full-cast production perfectly captures the zeitgeist of mid-19th-century New York. Amy Irving shines in particular, starring as the central character Catherine Sloper. Her precise voice acting empathetically conveys Catherine's painful position, sandwiched between two strong-willed, money obsessed men. George Gaynes also finds his niche in his portrayal of the complex and polarizing character of Dr. Sloper. A wonderful production of this Tony Award winning drama.

This Tony Award-winning play, set in New York City in 1850, centers on the painfully shy Catherine Sloyer, who lives in Washington Square with her father. When Catherine falls in love with a handsome suitor, Dr. Sloyer threatens to disinherit her, convinced that the young man could only be interested in her fortune. The decisions Catherine makes and their surprising consequences mark The Heiress as a complex and satisfying portrait of the American character.