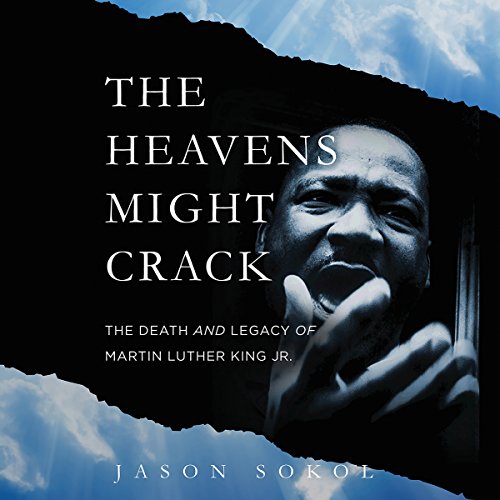 A vivid portrait of how Americans grappled with King's death and legacy in the days, weeks, and months after his assassination

On April 4, 1968, Martin Luther King Jr. was fatally shot as he stood on the balcony of the Lorraine Motel in Memphis. At the time of his murder, King was a polarizing figure - scorned by many white Americans, worshiped by some African Americans and liberal whites, and deemed irrelevant by many black youth.

In The Heavens Might Crack, historian Jason Sokol traces the diverse responses, both in America and throughout the world, to King's death. Whether celebrating or mourning, most agreed that the final flicker of hope for a multiracial America had been extinguished.

A deeply moving account of a country coming to terms with an act of shocking violence, The Heavens Might Crack is essential reading for anyone seeking to understand America's fraught racial past and present.

"Jason Sokol has done it again!... In vivid prose rooted in deep, wide-ranging research, The Heavens Might Crack is an indispensable read for all who would comprehend the past and care for our future." (Harvard Sitkoff, emeritus professor of history, University of New Hampshire)

"Jason Sokol details with aching clarity how King's assassination and the urban uprisings of April 1968 sent shock waves across the landscapes of America's racial crisis and the world's revolts.... The heavens might have cracked, but Sokol's not-too-distant mirror shimmers with intensity and the recognition of King's continued relevance to our own travails." (Thomas F. Jackson, associate professor of history, University of North Carolina)

"Coming at a moment when an open racist occupies the highest office in the land and white terrorists proudly march in our streets, Sokol's book helps us understand how we got here, and how the forces of hatred and bigotry that ended King's life were never fully extinguished but remain very much with us today. A must read." (Andrew W. Kahrl, author of Free the Beaches: The Story of Ned Coll and the Battle for America's Most Exclusive Shoreline)