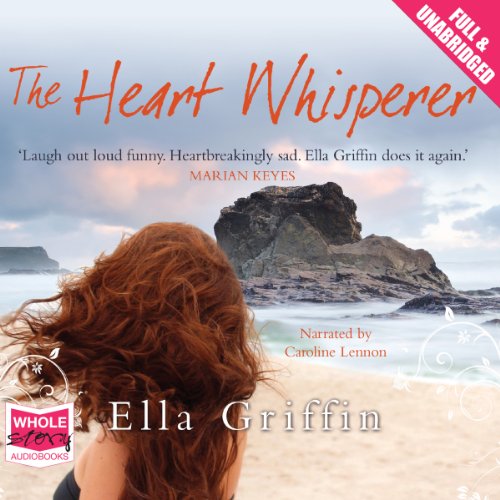 By: Ella Griffin
Narrated by: Caroline Lennon
Try for £0.00

On her thirty-third birthday, Claire decides that it's time to grow up.

Her mother was thirty-three when she drowned. She’d had everything to live for, but Claire's life is a mess. All her relationships have fizzled out. Nothing in her life works. If it wasn’t for the once-very-famous Ray Devine, she wouldn't even have a place to live. She gives herself twelve months to sort out her life…

What listeners say about The Heart Whisperer

Made me cry, laugh and didn't want it to end!!

What a fabulous story!!
This book made me relate to my own life and heartbreak that I have had to overcome. It had me laughing, crying and I didn't want it to end!
Thank you :-)

The easiest way to recommend this book is that its main character, Claire, is one of the most likeable characters you'll find. The book's cast, as with Ella's first novel, "Postcards From The Heart" all hail from contemporary Dublin, in Ireland. This Dublin is a little changed from the first novel, however, as it's reeling in the fallout of the recession, but still full of people trying to survive whatever their lives bring.

The plot, primarily about a woman's belated coming of age, delivers a spirited account of a year in Claire's life, and is paced well, with humour and verve. It also covers her elderly father's awakening from a 27 year depression, a fame-keen rock star's comeback attempts and the challenges and heartbreaks of a couple trying to conceive.

The drama will be true-to-life for many readers, as it covers career traumas, relationship issues, parenthood and all in a very present-day context, set in the world of television, music and film.

The humour abounds, and is really "laugh out loud" as Marion Keyes puts it on the book's cover. Griffin's witty take on situations, whether clever word-play or hilarious character quirk make the book highly enjoyable. One particularly likeable character in the book - "Dog" - a geriatric canine of Shakespearian proportions, will win readers' hearts all by himself.

Audiobook buffs will be delighted to know that "The Heart Whisperer," is again narrated by Irish actress Caroline Lennon, who recounts the role in a pitch-perfect South Dublin accent that fits right in with the location and social environment of the book. The eloquent Ms. Lennon also does accents - from American to Cockney to South African - with aplomb.

Well, either way, the reader will enjoy the book, and look forward to more from Ella Griffin.