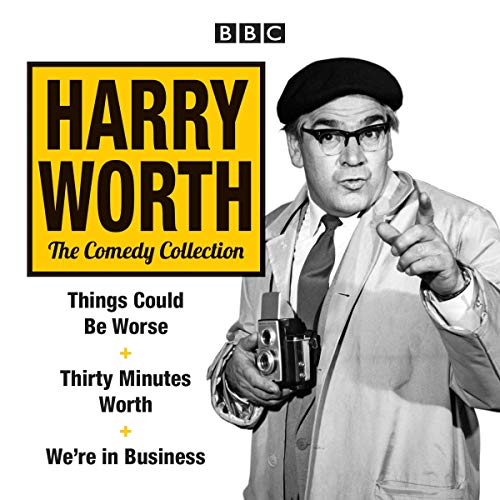 The Harry Worth Comedy Collection

Highlights from Harry Worth’s best-loved radio series, plus two profiles exploring the life and career of the influential comedian.

A master of comic confusion, Harry Worth’s genial, bumbling characterisations charmed the nation on radio and TV from the late 1950s until well into the 1980s.

This collection includes all 13 episodes of his eponymous show, Harry Worth in Things Could Be Worse, in which Harry - playing himself - blunders his way through a catalogue of mishaps and misadventures. Also featured are a selection of episodes from the hilarious sitcom Thirty Minutes’ Worth, which sees Harry confusing all and sundry once again, and eight of the surviving episodes from We’re in Business, which stars Harry as the bewildered sidekick to Peter Jones’ dodgy small-time businessman. Among Harry’s costars in these three series are John Baddeley, Miriam Margolyes, Jacqueline Clarke, Charles Collingwood, Dick Emery, Irene Handl and Beryl Reid.

A 20th anniversary show, Harry Worth: The Man in the Window, pays tribute to the popular comedian, as presenter Glenn Mitchell tells his story through interviews with the man himself, his friends and his colleagues, including producer William G Stewart and actor Jonathan Cecil. And in How Tickled Am I?, Mark Radcliffe looks back on Harry’s rise to fame and the highs and lows of his comic career.

What listeners say about The Harry Worth Comedy Collection

The DNA of So Many Comedy Heroes

The bumbling, pleasant but misguided Harry Worth came through the same ranks and Morecambe and Wise and Tony Hancock but has largely been forgotten. In this collection you can trace the DNA of comedy greats like Victor Meldrew as you encounter the disarmingly charming but utterly confuddled and misunderstood Harry Worth. A hidden gem more should appreciate.