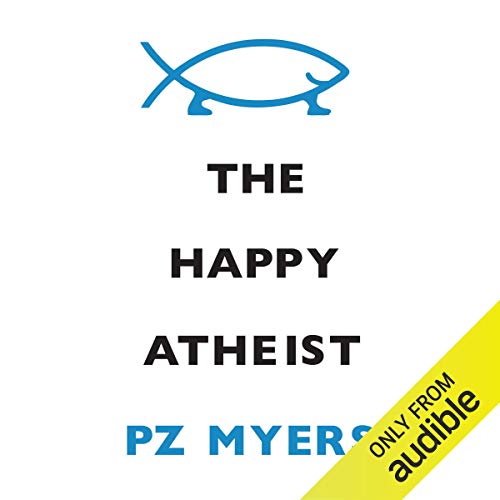 "I’m an atheist swimming in a sea of superstition, surrounded by well-meaning, good people with whom I share a culture and similar concerns, and there’s only one thing I can do. I have to laugh." (PZ Myers)

On his popular science blog, Pharyngula, PZ Myers has entertained millions of fans with his infectious love of evolutionary science and his equally infectious disdain for creationism, biblical literalism, intelligent design theory, and other products of godly illogic. This funny and fearless book collects and expands on some of his most popular writings, giving the religious fanaticism of our times the gleeful disrespect it deserves by skewering the apocalyptic fantasies, magical thinking, hypocrisies, and pseudoscientific theories advanced by religious fundamentalists of all stripes.

With a healthy appreciation of the absurd, Myers not only pokes fun at the ridiculous tenets of popular religions but also highlights how the persistence of Stone Age superstitions can have dark consequences: interfering with our politics, slowing our scientific progress, and limiting freedom in our culture.

Forceful and articulate, scathing and funny, The Happy Atheist is a reaffirmation of the revelatory power of humor and the truth-revealing powers of science and reason.

What listeners say about The Happy Atheist

The overall audio book is pretty good, though fairly light on facts, it does a pretty good job of presenting the arguements. Aron Radio did an excellent job narrating and actually improved the overall experience because he has a very natural way of reading the material aloud that made the whole experience much better.

Where does The Happy Atheist rank among all the audiobooks you’ve listened to so far?

Without a doubt one of the most enjoyable listens so far (although I admit I've only listened to a handful of audiobooks). Highly entertaining. After listening to several other Dogma Debate audiobooks I have to say this is by far the best I've heard from them as well.

What other book might you compare The Happy Atheist to and why?

With the title and an author as well known as PZ Myers it might seem easy to lump it in with any other atheist book. It certainly has common elements to many atheist books, as it touches on common subjects and responds to common theist arguments. But it's very unlike many atheist books in that it is absolutely dripping with sarcasm, sharp wit, and humor. It doesn't take itself so seriously. Emphasis should be placed on "Happy" rather than "Atheist", because it's very much meant to be something we can laugh about rather than simply more arguments over religion. PZ's well known style won't let his fans down, and I think any atheist can enjoy the lighter tone this book takes. And humor and happiness are potent weapons when used by skilled writers like PZ, there are still plenty of punches even if it's not as dense as Dawkins or Hitchens, or as somber as many books of deconversion from theism. Perfect for an audiobook.

I admit that I am biased, Aron Ra is one of my heroes and I downloaded this book immediately when I heard it was Aron Ra that read it. But I also went in a little curious and skeptical. Aron Ra has a tendency to talk fast, go from quiet to loud, and I wasn't sure how much of either Aron Ra would drown out PZ's voice or how little of Aron Ra's unique character would be sacrificed for the sake of the audiobook. I am happy to say I was pleasantly surprised. Aron Ra blew me away with his performance. He spoke clearly, slowly, level, emphasized just the right words when needed, and had a clear passion that any Aron Ra fan has come to love and expect. But he was still very much reading PZ's words, there was no point when I felt PZ was overshadowed by the Texas Tank. I was also thrilled at hearing Aron Ra do several voices and impressions where appropriate, it added an extra layer of humor to an already brilliantly funny book. I really hope this is not Aron's last audiobook.

PZ's analogy at the beginning of religion being like a hat was fantastic. And while I'm sure Pharyngula readers (or even people who don't even really know PZ) will be familiar with the "eucharist controversy", it never ceases to amaze me hearing how people react so venomously over something so silly. But really throughout the book I was impressed by PZ's words, arguments, and insights, and regularly laughing out loud to something said.

I'm still unsure what audience PZ had in mind. It seems like a book more for atheists and specifically those at least casually familiar with him. Even though it's a fairly light book I probably wouldn't recommend it to any Christians or Muslims I know personally, there are still plenty of points when they're the brunt of the joke (for good reason). But there are also many times when it seems it's addressing a believer or touching on an argument no atheist hasn't already heard a million times before. Perhaps there are thick skinned liberal theists or those sitting on the fence who could listen to and appreciate this book, but PZ doesn't seem interested in convincing anyone or deconverting anyone either. I think it's more for entertainment than anything. And entertaining it was!

Essential reading for the atheist and theist

This books presents an unique perspective and easily digestible arguments against theism. While the arguments are not necessarily new ones, they are framed in such a way that ends up being more compelling by being less pretentious and tedious. The book is brilliantly narrated by Aron Ra and he delivers the message as if he wrote it himself.

This is best suited for someone getting into atheism. This is fairly too basic for someone who is already atheist-- like preaching to the choir. But well read, logically presented, a bit emotional (justly) on points where atheists are expected to be pious towards others beliefs.

Would you consider the audio edition of The Happy Atheist to be better than the print version?

Have you listened to any of Aron Ra’s other performances before? How does this one compare?

Just his YouTube lectures. This is good in different ways. On the plus side, he does voices. On the minus side, he pronounced Wichita (which it? taaaww) as we-CHEE-ta. You can't apply latin pronunciation rules to the names of Kansas towns. We voted. Science and pronunciation rules don't matter in our state. We choose what sounds letters make and what laws of physics apply in our borders.

I'd like to hear Aron Ra do more voice work in the future.

Just discovering the author. He framed many things I've heard before in a way that had me laughing on the subway. I intend to check out his other work.

This is a really irreverent and funny book, a guilty pleasure for an atheist rather than any serious attempt to convert anyone (although, that said, I really love the idea of using humour and ridicule to highlight and defeat some of the dangerously stupid ideas that are pushed on society), but a title I enjoyed immensely and laughed out loud many times while listening to.

I would thoroughly recommend.

I was hesitant at first because I read a lot of atheist books and I didn't want to read something that wad exactly the same. I am happy to say that it was a unique read and made me laugh quite a bit.

I like this book because it makes me feel like I'm not alone. That at least some people have sense.

What made the experience of listening to The Happy Atheist the most enjoyable?

I don't always agree with PZ but I do respect and enjoy his work. This book is no exception.

What does Aron Ra bring to the story that you wouldn’t experience if you just read the book?

I really prefer books that are read by the author. But if PZ wasn't going to read it, you couldn't do any better than Aaron Ra.

Big fan of the narrator Aron Ra. I knew it had to be a good one. I was not dissapointed. Got a good few giggles among all the thougt provoking points about human nature and reality.