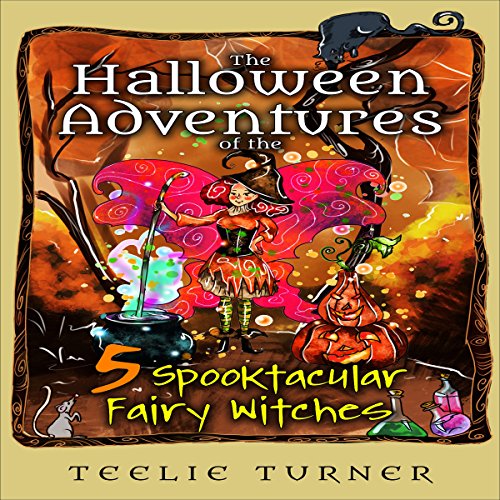 The Halloween Adventures of the 5 Spooktacular Fairy Witches

In this is book you will find five delightful stories about some of the cutest fairy witches. You will be introduced to Chef Gardenia and The Sweet Fairy Treats. There is not one fairy anywhere in all of Fairy Land who does not love sweets, especially those created by fairies themselves. Some fairies have speculated that the reason their treats are the best is because of the tiny touch of magic that the fairies use when they cook and bake. The bakers around Fairy Land love to use seasonal ingredients in their amazing creations. With Halloween approaching, they are planning out their menus and trying to create some new original dishes. Learn how she uses her magic to create amazing Halloween treats.

You will learn about Courtney's Fairy Costumes and how clever she is in creating costumes. Fairies love to be able to get dressed up in beautiful things. Most of the time they wear the same outfits while they go about their missions of providing goodness in numerous ways throughout the world. This is why my team and I are so busy at this time of the year. We are fairy seamstresses, and it is our job to fit and create costumes for many of the fairies who live in Fairy Land, which stretches out over the whole world.

Learn about Hallie's Holiday Store and why she loves Halloween as her favorite holiday. Hallie owns her own holiday store. The holiday that it concentrated the most on was Halloween because it was Hallie's favorite. Hallie had been born on October 31st and her parents chose her name because of it. Her father sometimes still referred to the day as Halli-ween. Hallie especially loved Halloween decorations and every year she would be the first one in her community to put them up.

Issy's Fairy Halloween Party is a very popular holiday event. You will find out about her decorations and also where the magical Halloween party is being held this year. It is the night of November 1st, and the fairies were getting together to have their annual Halloween party. It was a night late because the fairies had spent the previous night trick-or-treating and so that they did not have to choose which fairy activity to attend, the organizing committee chose to hold the party one day late.

Don't forget about Trixie-Love Trick-or-Treating Fairy Style. A group of fairies had gathered outside of the library at Fairy Headquarters as it was to be the first stop on their night of trick-or-treating. Fairies love treats and playing tricks, so for many, it was a favorite yearly event. Even the adults were able to participate because due to their size if they went trick-or-treating where humans lived, they appeared like children in their costumes.

Remember if you are a believer in the magical world of fairies, be sure to walk slowly through your own gardens as you will surely catch a glimpse of your own garden fairy, let me know what kind of fairy resides in your garden!