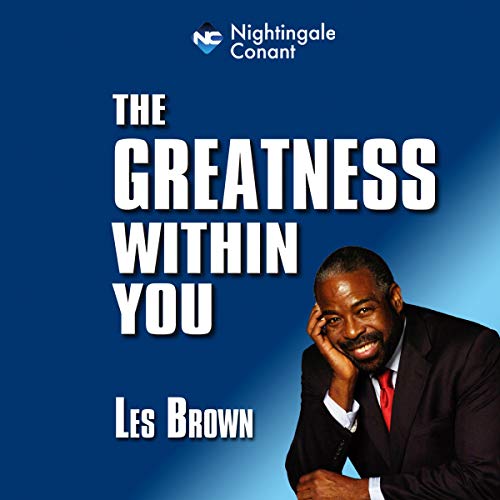 The Greatness Within You

In this all-new program from Nightingale-Conant, The Greatness Within You, you'll hear Les at his very best - inspiring you to tap in to the incredible potential for achievement, happiness, and influence that is lying dormant, just waiting to be unleashed!

Les learned these lessons firsthand when he had to find his own untapped potential. In elementary school was when he was mistakenly declared "educable mentally retarded". Teachers did not recognize the true potential of little Les Brown. However, he used determination, persistence, and belief in his ability to go beyond being a sanitation worker to unleash a course of amazing achievements, including becoming a broadcast station manager, a political commentator, and a multiterm state representative in Ohio.

Now Les is determined to bring out that same potential for greatness in you!

What listeners say about The Greatness Within You

Inspirational from beginning to the end.

Loves Les Brown, he speaks from the heart.
I love his true life stories the best, it goes to show that we can overcome adversity if we can change our mindsets.
I will listen to this book over and over again, and will recommend it to my team members and anyone else who are willing to change their lives.

Les will pick you up an inspire in a magic way, life changing lessons taught with laughter n joy

This man oozes positivity. He makes you believe you can accomplish anything. Go for it!

It's not over until you win baby!

Great audiobook, Les is high energy, motivational and inspiring. I couldnt get enough of this and was gutted when it finished.
Fully recommend this if you are in need of picking up, in need of encouragement, or struggling to push past an obstacle.

Actions solutions methods and answers delivered with charisma! If you’re looking for motivation and to get rid of procrastination this book is what you are looking for.

This is the most inspirational and life-changing audio book I have listened to. My world will never be the same, due primarily to Les Brown's words and heart-warming infectious laugh

The Greatness within You

Wow !! Very inspiring. This is the first time I have really connected within my soul with a stranger- who is saying things that I have said to myself. This book has made me get up to now start fulfilling my dreams and desires.

Absolutely fantastic every household should have a copy.

Thankyou so much xx

only les Brown can

Love les Brown and the way he works a crowd. did find him being repeated from different conferences but still wonderful

quite repetitive but encouraging. worth a listen for a bit of motivation. why not right

This audio book will challenge the listener to think, contemplate and make a decision. Either I am living to win or whining and waiting to die. I takes courage to step out, but you'll be glad you did.

I love Les Brown. I love his message. I don’t love this book because every chapter is a repeat of the previous chapter. They’ve collected a series of seminars on the same subject. There are slight variations but the theme and string of stories is exactly the same. You only need listen to the first chapter.

If you have heard The Power of Purpose, then many of the chapters are familiar. Even within this book some of the stories are repetitive.

The greatness within you- Lea Brown

All these speech have the same story. Just watch the videos on YouTube. The content is good

I love Les Brown but this audible was very repetitive. Great stories but it made me think something was wrong because it repeated so often.

Life Changing when I wanted to give up.

Very inpirational and I need to rewind and listen over again until I breathe again...

I love listening to Les Brown and there is definitely no shortage of great content here. However, the presentation is a bit confusing. For starters, it appears to be a compilation of work done in the studio and also live speaking engagements. This is just fine, however there are a lot of the same stories, quotes, etc. being repeated throughout the recording. Also, it is as though a lot of the content is being “repurposed” for this recording. For example, the first part of the audiobook appears to be made for pharmaceutical sales reps or people in medical sales to help motivate them and learn to overcome rejection. Les references “your ability to help doctors better treat their patients” several times. So that was a little odd. And many of the live recordings appear to be excerpted from some kind of multi-level marketing rally where he keeps referencing someone named “B.K.” and the opportunity available to attendees. At the end of the book, the last few live recordings appear to be Les speaking at a church service and quoting scripture. Again, content is great and Les is still my favorite speaker, but this seems patched together and is often repetitive or tailored to a specific group. I would recommend his “Power of Purpose” or “It’s Not Over Until You Win” recordings over this one.

this is a series of events not an audio book

This is a series of events that have been recorded, so as you can guess some of the examples are used again and again, and yes you could say that some of them get old.

But this is a great course from a great man so how many times is too many times to listen? I know that I for one will listen to this again it's just like Mama browns sweet potato pie it makes you wriggle your toes!

yes it could probably be shortened to 1 hour or less or even just give you one chapter for a few dollars, but you can never hear something that is good for you too many time

Enjoy!! that's why you buy motivational books and if you don't enjoy it maybe your not ready to hear it, So return it and buy it again at a later date!

Yes, You've got to be hungry!

I love listening to Les Brown. He is a wonderful motivator. I highly recommend him.

I loved the material but the volume kept fluctuating and I was listening in my car so I had to keep adjusting the volume while driving.