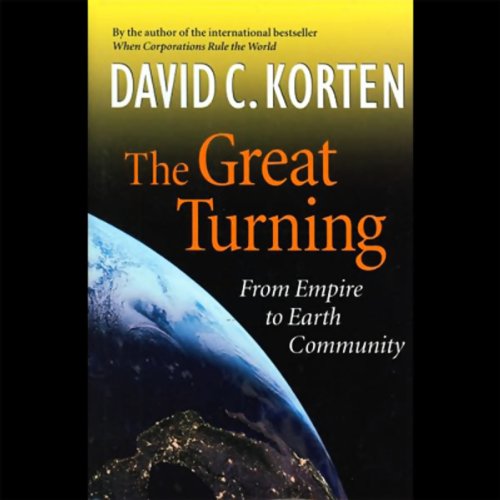 By: David C. Korten
Narrated by: Sandra Swafford
Try for £0.00

In his classic international best seller, When Corporations Rule the World, David Korten exposed the destructive and oppressive nature of the global corporate economy and helped spark a global resistance movement. Now, he shows that the problem runs deeper than corporate domination with far greater consequences.

Korten argues that global corporate consolidation of power is but one manifestation of what he calls "Empire", the organization of society by hierarchies of dominance that have held sway for the past 5,000 years. Empire has always resulted in misery for the many and fortune for the few. Now it threatens the very future of humanity.

The Great Turning traces the ancient roots of Empire and charts its long evolution from monarchies to the transnational institutions of the global economy. Empire is not inevitable, not the natural order of things, Korten argues. He draws on evidence from sources as varied as evolutionary theory, developmental psychology, and religious teachings to make the case that "Earth Community", a life-centered, egalitarian, sustainable way of ordering human society based on democratic principles of partnership, is indeed possible. He details a practical strategy for advancing a turning toward a future of as-yet-unrealized human potential.

What listeners say about The Great Turning

If you are a curious type, and ever have wondered about the nature of huge multinational corps, how they came to be, and wondered about their reason for existence, and their relationship with the state...this is a book for you, the sheer scope of this book is amazing, Korten draws analogies from ancient 'empire' based societies from Greece, Persia, Rome...and shows that human motivations and actions have changed little over 5000 years, although initially a depressing view of the human condition, Korton suggests (persuasively in my opinion) that humans now have the ability and the information, to change human society, from the empire based, money driven, consumerist environmentally damaging lifestyle, to a more sustainable future of 'earth community'...surely we all know something will have to give ??
There is a huge amount of solid historical information in this book, from the formation of the Roman Empire, to the declaration of independance of the USA,...even if you reject some of Kortens analyasis, the story of human history contained is brilliant
Well read and very very well written, its not an easy an easy ride but I shall listen to it at least twice....excellent, I only wish that I could get his previous book 'when corporations rule the world' in audio format.

The great (trouble) turning (the page)

The sentimental, open-university, sandal wearing, beard sporting, vegan living, side-burn touting, cauliflower cheese chomping brigade will probably be delighted at the style of this book, but I found it nauseating. It's the first audiobook I haven't got to the end of - I just couldn't take any more.

The chapter on how they screwed up the earth summit with their voluminous language and sanctified inclusivity, just sums up the whole book for me, and the reason why the ideal has failed to engage the public properly. The author may have a point, but he needs to spend some time with normal people and then write about it again.

Brothers and collegiate sisters of the mother earth, I suggest you look elsewhere. Something about the Venus Project, which is more in the realms of practicality, should suffice.

... at least that what this book was for me. While I can partially agree with other reviewers that Korten's attempt to (re-)tell the stories needed for the other view on the world which he calls Earth Community (as opposed to the prevailing view he calls Empire) feels a bit immature, it is very much appreciated and needed. While clearly inspired by spiritual movements, the author maintains a scientific and rational approach, another aspect of this book I admire greatly. This book was the most inspiring book I have read in many years, and I read a lot. There is already a lot going on in the world to work on something like a Great Turning (towards Earth Community) and this book deserves a serious place as an inspiration from one of our elders in this work.

ahead of its time?

Some writers are so far ahead of their time that they fail to get the recognition they deserve. I'm not sure that is the case here. I think Korten is perfectly synched with "time." It's everybody else who is so far behind the times that creates the mismatch. Korten is presenting "cooperation" as a life affirming essential in an age when dog eat dog is still the mantra. We have no trouble grasping the concept of cooperation when it's abstract, cartoonish and linked to a story long ago and far away (the classic childhood tale of two men with a pot of food and only long handled spoons), but in the here and now it all becomes Greek (the stock market goes up when employment goes down, schools that can't afford a good lit department invest heavily in a new football stadium, etc.) Sadly, I think things will have to get much worse before most readers truly open up to Korten's message. Let's just hope it isn't too late by then.

If I'd read user reviews prior to buying this audiobook, I wouldn't have bought it, and would have missed some very thought-provoking ideas, particularly in Korten's take on American history. He casts the whole founding of the United States in the light of his central thesis, that empire is inimical to humanity. He lays out some very good arguments against starry-eyed patriotism about Liberty and Justice For All when considering the foundations of the nation. Fascinating and perspective-altering.

I'd be remiss, however, if I didn't warn other audiobook listeners (of any political persuasion) that this is a very poorly narrated piece with mediocre production value at best. The reader, I'm sorry to say, sounds like a 2nd-grade teacher didactically o-ver-pro-nouncing every word--and with a slight lisp, no less, and as a result, this book was very difficult for me to listen to.

The narrator does a horrible job. The book may be good but the audiobook is unlistenable. unimpressive at best.

the book: a useful metaphor that's a bit over-applied at times. it comes to feel a little less rich, which is sad because it detracts from it's power.
the reader is also a bit dry, but wonderfully clear and easy to understand. since the topic gets plodding, I wish the reader were a little more folksy and engaging.

This is a really long book to listen to such an affected voice for the duration. Lots of great info and perspective. Loved many parts of it. Some of it was really repetitive, and that voice with it's soft "t"s drove me nuts.

This is a must read manifesto for our time.
Be prepared for a roller coaster ride through despair and hope.

Where does The Great Turning rank among all the audiobooks you’ve listened to so far?

One of the best in the genre of analysiing and bringing to the fore the historic, social, psychological and many other root causes for the mess we are in and provides very much spot on recommendations on how to fix the mess we are in.
This book is highly recommended to anyone trying to understand and see the light at the end of the tunnel of where we should head. But also should be compulsory reading for all economcis and law students (often part of the elite), an all in political and economic power (they will likely hate it).

What does Sandra Swafford bring to the story that you wouldn’t experience if you just read the book?

I Can't Believe What I Heard!

This book had the potential to be a great AWAKENING... Unfortunately... and I've never said this before... the narrator was horrible... beyond bad... I could not listen to this book... even though I wanted desperately to hear the information within... I believe in the great turning... I believe in the cycle of life and the evolutionary growth of human consciousnesses... and that one day their will be a falling away from greed... and the lust for power and control... That said... THE NARRATOR RUINED THIS AUDIO BOOK!... END OF STORY... BUY THE BOOK INSTEAD!...

Hit the nail on the head

Albeit a bit wordy and a tad longer than it needed to be, this audiobook sums up many of the earth changes already in progress.

Imperials will yell 'not true' but for those of us at the right level of consciousness this books gives great evidence and diction to the change we need to be in the world, or else.