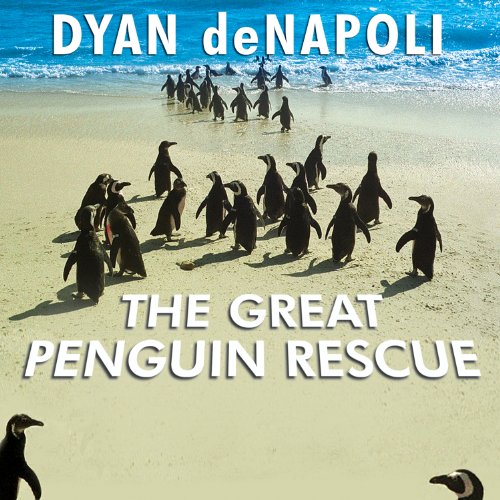 On June 23, 2000, the iron-ore carrier MV Treasure, en route from Brazil to China, foundered off the coast of Cape Town, South Africa, spilling 1,300 tons of oil into the ocean and contaminating the habitat of 75,000 penguins. Realizing that 41 percent of the world's population of African penguins could perish, local conservation officials immediately launched a massive rescue operation, and 12,500 volunteers from around the globe rushed to South Africa in hopes of saving the imperiled birds.

Serving as a rehabilitation manager during the initial phase of the three-month rescue effort, Dyan deNapoli - better known as "the Penguin Lady" for her extensive work with penguins - and fellow volunteers de-oiled, nursed back to health, and released into the wild nearly all of the affected birds. Now, at the 10th anniversary of the disaster, deNapoli recounts this extraordinary true story of the world's largest and most successful wildlife rescue.

When she first entered the enormous warehouse housing most of the 19,000 oiled penguins, the birds' total silence told deNapoli all she needed to know about the extent of their trauma. African penguins are very vocal by nature, prone to extended fits of raucous, competitive braying during territorial displays and pair-bonding rituals, but these poor creatures now stood silently, shoulder to shoulder, in a state of shock. DeNapoli vividly details the harrowing rescue process and the heartbreaking scenarios she came up against alongside thousands of volunteers.

DeNapoli's heartwarming and riveting story is not just a portrait of these captivating birds, nor is it merely a cautionary tale about the environment. It is also an inspirational chronicle of how following ones passion can lead to unexpected, rewarding adventures.

What listeners say about The Great Penguin Rescue

I am an animal lover--and the idea that oil spills happened and will continue to happen is truly tragic. But this story was very interesting--it contained a lot of detail of this rescue, and the sheer logistics of a situation like this are something you can't even imagine!

The narrator was perfect for this book--she did a great job. What kept me from rating it 5-stars all the way was the story kept repeating itself--probably for emphasis or to tie two parts together. But a few times, I thought I had lost my place in the book because I had clearly heard that anecdote or statistic before. Each time is seemed to evolve into a new section or story of the book, and I realized I had not lost my place.

The final chapter or two spelled out the harsh reality of how the oceans and ocean life are being affected by climate change, environmental changes and destruction by man--it is hard to hear, but we must be made aware of these facts if there is any hope of saving threatened and endangered species in the future. Very interesting book--I'm glad I "read" it!!

Wish I could have been involved!

Where does The Great Penguin Rescue rank among all the audiobooks you’ve listened to so far?

What was one of the most memorable moments of The Great Penguin Rescue?

Learning about how penguins work

This is a great story about penguins, rescue, environmental damage and human help.