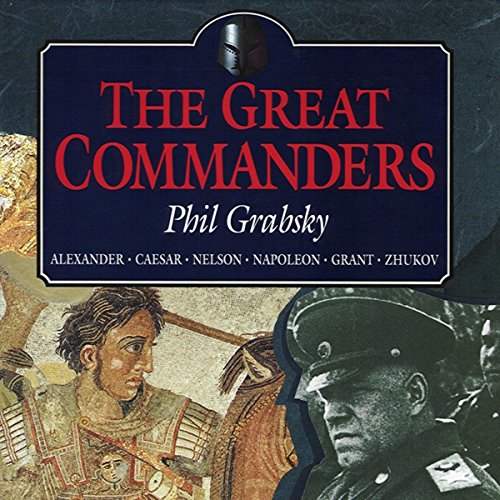 The Great Commanders is a masterly portrait of six men - Alexander the Great, Julius Caesar, Horatio Nelson, Napoleon Bonaparte, Ulysses S. Grant and Georgi Zhukov - whose military genius changed the course of world history. Providing a refreshing new opportunity to compare soldiers from such disparate backgrounds and periods, each chapter focuses on the life and achievements of one of the commanders, considering their motivation, overall strategy, tactical skill, and the vital importance of each man's special personal qualities. What forces drove them? Did Nelson's legendary victory at Trafalgar in 1805 derive from his brilliance as a naval tactician alone? Does Marshal Zhukov's triumphant conquest of Berlin in 1945 justify the claim that he was the greatest general of the Second World War?

Concentrating on one battle in particular for each commander, this penetrating study brilliantly illustrates the thinking, method, and individual dynamism behind the great military campaign.

A poor book.. Robotic facts and and inaccuracies.. Example.. States blandly that Hitler burned the reichstag..

I picked up the Great Commanders primarily because the title seemed to cover such a diverse group of Military Leaders, many of whom I knew little about. The book was very enjoyable and one that I would recommend for World History buffs. The author treated each of the Commanders in a very even handed manner - noting good and bad character traits that they appeared to exhibit. Of particular interest to me was what seemed to be the motivating factor for each of the Commanders that are detailed in the book - some were fighting simply for glory, some for their very survival, and some for an ideal or a particular vision that they held. The book was enjoyable and one that I would recommend, but I will say that the content is high level and not incredibly detailed. If you are looking for detailed information of the individual commanders themselves then I would probably recommend reading biographies in lieu of this one. The narration was enthusiastic and for the most part above average.

A quick and informative walk in the shoes of great men. Not overly packed with information and very well written. Narrator was awesome.

Love the the information and stories of these unforgettable men. The narrator is pleasant to listen as well. Great book and audio over all.

Great and quick to listen to

The author did a fantastic job of summarizing the lives of figures and included lots of details that are not available in your average history book.

It was enjoyable to listen to as well. It took about 30 minutes for me to get used to the British accent however.