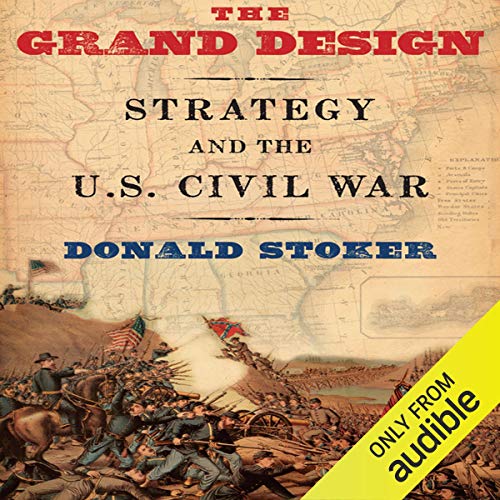 Despite the abundance of books on the Civil War, not one has focused exclusively on what was in fact the determining factor in the outcome of the conflict: differences in union and southern strategy. In The Grand Design, Donald Stoker provides for the first time a comprehensive and often surprising account of strategy as it evolved between Fort Sumter and Appomattox. Reminding us that strategy is different from tactics (battlefield deployments) and operations (campaigns conducted in pursuit of a strategy), Stoker examines how Abraham Lincoln and Jefferson Davis identified their political goals and worked with their generals to craft the military means to achieve them - or how they often failed to do so. Stoker shows that Davis, despite a West Point education and experience as Secretary of War, ultimately failed as a strategist by losing control of the political side of the war. Lincoln, in contrast, evolved a clear strategic vision, but he failed for years to make his generals implement it. And while Robert E. Lee was unerring in his ability to determine the Union's strategic heart - its center of gravity - he proved mistaken in his assessment of how to destroy it.

Historians have often argued that the North's advantages in population and industry ensured certain victory. In The Grand Design, Stoker reasserts the centrality of the overarching plan on each side, arguing convincingly that it was strategy that determined the result of America's great national conflict.

top military lessons for sure

loved it! would recommend to any military person to learn more about strategy and planning.

Clausewitzian commentary on the Civil War

The author is firmly in the Clausewitz camp, whose influence ebbs and flows over the decades. He does do a very nice job of evaluating the actions and correspondences of most of the major commanders and their government from that framework. My guess is that this would be an easier listen if you already familiar with many of the campaigns and personalities - maybe having read some Foote, Sears, Catton, etc.

The narrator has a few odd pronunciations, but overall is easy to listen to. Unfortunately, the editing was a little sloppy, leaving in retakes in a few places and at least one instance of a short excerpt apparently missing.

What disappointed you about The Grand Design?

Narration is filled with mispronunciations

What was most disappointing about Donald Stoker’s story?

One chapter has a repeated paragraph and an omission

What character would you cut from The Grand Design?

The Professor Holds Forth

Have you listened to any of Thomas Dunn’s other performances before? How does this one compare?

Could you see The Grand Design being made into a movie or a TV series? Who should the stars be?

This book is what you would reasonably expect to come from a professorial academic who has some very firm ideas on how the Civil War was won (and lost). Basically, it appears that the South was doomed to failure by its political hubris and stupidity from the git go, a pattern of behavior epitomized by the titular head of the new nation with no practical view of the big picture - Jefferson Davis. Meanwhile, Abraham Lincoln was having some minor fumbling and bumbling at the beginning, but he was a naturally wise and intuitive guy who knew there needed to be a grand design for winning the war, and was simply delayed a few years while he found the right players to implement his vision. Well read and entertaining enough for those already well immersed in minutiae on the War, it is still ultimately a lengthy academic lecture which espouses one man's opinion, but really breaks no new ground. The particular value of this work is one of stimulating alternative opinions on the truly grand "strategic" aspects of the War. In truth, Mr. Stoker's working premise that the North developed a meaningful strategic plan to achieve victory and the South never did may not only be the obvious first answer, but the last as well.