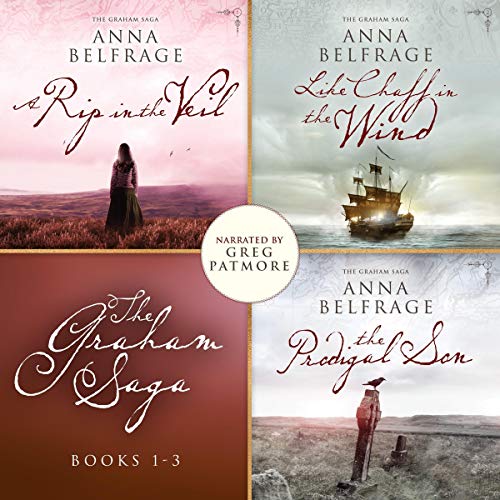 On a muggy August day in 2001, Alexandra Lind was unexpectedly thrown backwards in time, landing in the year of Our Lord 1658. Catapulted into an unfamiliar and frightening new existence, Alex could do nothing but adapt. After all, while time-traveling in itself is a most rare occurrence, time-traveling with a return ticket is even rarer.

Fortunately for Alex, she lands at the feet of Matthew Graham. No woman could ask for a better guide or protector in this strange new world of hers. Unfortunately, Matthew comes with baggage of his own, and soon enough it will be her protecting him, just as much as he defends her.

This boxed set includes the first three books in The Graham Saga - all the way from how Alex first met Matthew, to their adventures in Colonial Virginia, and back to a Scotland torn apart by religious conflicts and English dragoons.

What listeners say about The Graham Saga, Books 1-3

This book has a decent story line. but full of explicit sexual situations. Wish I had known that before purchasing.

The narration is AMAZING!

Book 1- I enjoyed this book, though at times there were some rather outlandish twists and turns. That said, the attention to historical details was very well done. I was invested in the characters and it was fun to imagine how a 21st century woman would clash with the social riggers of the past.

Book 2 - Not as good as the first. While I was invested in seeing the story through, the plot seemed to loop in circles at times and it was frustrating to see the characters make the same mistakes over and over again. Alex lost some of her original shine, and while she remained outspoken she lacked the feminist charm she had in the first book.

It's the same plot running around and around, all based on a gimmicky premise. I made it through the first two books and got dizzy listening to the same travails and sex scenes over and over. And there are 9 of these? No thanks. I'm out. Patmore, as always, gave it his all.