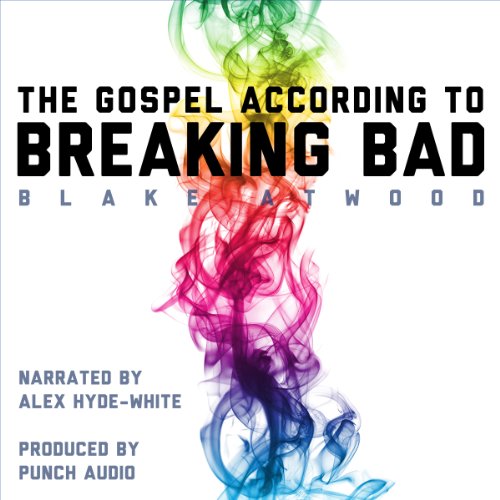 The Gospel According to Breaking Bad

The Gospel According to Breaking Bad

Breaking Bad showrunner Vince Gilligan wants to believe that heaven exists, but he "can't not" believe there's a hell.

Throughout this fascinating show depicting the shocking life and tragic times of Walter White, Gilligan offers his singular glimpse into a morally amoral universe, a place not unlike the world we live in.

The Gospel According to Breaking Bad takes a thoroughly Christian look at AMC's popular and critical TV hit.

Covering such weighty theological issues like identity, death, justice, power, fate, free will, and the gospel itself, listeners will be coerced into thinking more deeply about the universal questions Breaking Bad asks. In sections covering the colors and metaphors of Breaking Bad, fans will also come to a further appreciation for one of the most well-done TV series in recent history.

More than just an entertaining RV ride through the Albuquerque desert, Breaking Bad presents two unique characters, Walter White and Jesse Pinkman, each on notably different trajectories in their lives.

Are either redeemed by series' end? What do our reactions to their stories tell us about ourselves?

The Gospel According to Breaking Bad seeks to tell the old, old story through one of the most visceral and alluring stories of the present.

cultural milestone. Impressive analysis and great accents. If you are interested in religious perspectives in art criticism or are a Christian or seeker who has seen the series, you will enjoy this.

Would you consider the audio edition of The Gospel According to Breaking Bad to be better than the print version?

I had the pleasure of listening through this book without having watched a full episode of Breaking Bad. One thing the listener must take into account is the author's perspective to use this television show as a lens through which to observe the human condition and relate biblical truths and expound on why we "break bad" and if there is any hope for us.

While the pacing and the writing could have been a bit terser, the author's research into the show's creator's intentions and influences as well as his analysis of the characters made the show seem that much more worthwhile to me as well as served as a reminder that it is important to analyze the media we consume instead of just watching with our minds turned off, which is especially prescient for discerning viewers and Christians alike.

What was one of the most memorable moments of The Gospel According to Breaking Bad?

The actual testimony of a drug dealer that the author was able to retain.

Some of the concepts and themes are repeated so a shortened future edition could have the same punch and content.

For the "Breaking Bad" fan

I have only started watching the series Breaking Bad. Atwood does a fine job of explaining the direction of the show and of the characters themselves. The moral issues covered and the realities of day and life are here along with the realities that are faced in our own world. Atwood does not try to answer if the morals presented in the show are good/bad right/wrong, but instead allows the reader/listener to answer those questions for themselves. the world around us is not pretty, that would only be true to those who wish to turn a blind eye. Rather, Atwood reminds us that the choices we make in life, well that can also determine the life that we live. It's that fine line that separates us from right and wrong, and also the good and evil around us.

Which character – as performed by Alex Hyde-White – was your favorite?

As always, Mr. Alex Hyde-White has a wonderful range of voices and does a superb job. His timing and pace are perfect and he breathes life into the characters, just as he has done with this performance.

If you are a fan of the show, this is a great companion book to have.The authors writing is exceptional as the words come together very well to form a story that is both understandable and unique in its own way. The narrator has a deep and smokey voice, great tone that will pull you into the story.

I listened to this book awhile back but I hadn't really watched breaking bad. I recently watched the series and had to come back and give this book a review. This book answers all the questions we ever had about breaking bad. Loved the way it was narrated Alex Hyde-White is my favorite by far. I would highly recommend this book for anyone who loves breaking bad as I do now.

A MUST LISTEN FOR EVERY GOD-FEARING Br Ba FAN!!

Well written. Well produced... I couldn't put it down. I loved every second of listening to this book! Thanks Blake!

Where does The Gospel According to Breaking Bad rank among all the audiobooks you’ve listened to so far?

I have listened to dozens of audiobooks over the years and this is one of the most addictive and enjoyable one's I've heard. It maintained a great balance between simultaneously entertaining me while making me think. If you like books that compel you to be an active listener, this is a great one!

I highly recommend this recording and the book to not only fans of the show, but also for anyone interested in an examination of the downward spiral of the Walter White in all of us juxtaposed with the amazing grace of the gospel.

The reader does a fantastic job, subtly altering his voice for various quotes and putting just the right amount of emphasis and inflection as he brings Atwood's words to life.

Blake Atwood writes in a style that is at the same time accessible and addictive. He intelligently stirs the mind and imagination of the reader while never being pretentious. This is a great listen that will entertain you while disarmingly leading you towards introspection.

I'm that guy. The one guy who didn't see more than a couple of episodes of this show. Nevertheless, I listened to this audiobook because I am a fan of the author and was sucked in by the audio sample.