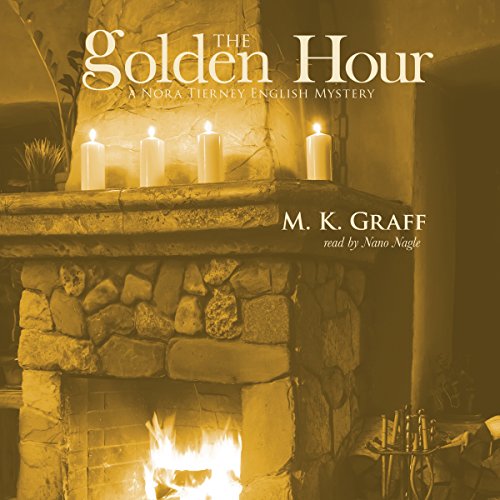 From the award-winning author of the Nora Tierney English Mysteries comes the most chilling novel to date.

Nora Tierney can't shake the feeling she has a stalker. While she's house hunting in Oxford, her partner, DI Declan Barnes, untangles the murder of an art conservator. When these situations collide, she finds herself fighting to save her child and their future.

"One of the best things about Marni Graff's latest Nora Tierney mystery, The Golden Hour, is the down-to-earth depiction of family life coupled with the tightly paced build of a twisty, time-honored puzzle. A meditation on love, loss and motherhood, The Golden Hour blends touchingly real domesticity with tongue-in-cheek humor, as the backdrop to a tale of art theft, germ warfare, and international conspiracy. The reflections of a reprehensible villain on the shortcomings of the British add just the right note of comedy to these otherwise weighty concerns. Added to this is a wonderful sense of place - Bath, Brighton, and Oxford are vividly rendered and charmingly true to life. Come for the crackling mystery, stay for the steady companionship of debonair detective Declan Barnes and feisty heroine, Nora Tierney, who offers warmth and smarts in equal measure." (Ausma Zehanat Khan, Among the Ruins, The Unquiet Dead)

What listeners say about The Golden Hour

Everyone is entitled to a few secrets.

The pace of this intriguing story is detailed and slow, allowing for careful coverage of the surroundings and consideration of relationships as Nora Tierney now with her ten month old son, is in the process of house hunting in Oxford to be closer, perhaps even living with, her new boyfriend, Declan, a detective inspector in the police force there. Having lived in Oxford for over three decades, this reader enjoyed the accurate travel routes and descriptions (for example eating at Browns Cafe in the old Covered Market) and the very realistic, if often mundane, conversations between friends. The character building was excellent, taking the reader right inside the, often confused, emotional head and heart of the main protagonist. One thing did confuse me, however in the midst of all of the verisimilitude, when was the story set? It seems to be modern times, yet a reference to small pox inoculation suggests that some youngsters had not received it. True, but this would include 'youngsters' of well over half a century. The practice ended before the birth of my approaching 60 years old daughter (and I didn't receive one, either!)

As well as emotional angst over her future with DI Barnes, Nora has another problem: she thinks she is being followed. And she is. But why? The narrator, Ms.Nagle has the crystal clear voice of the classic English reader, with perfect enunciation and intonation. Each character is given a distinctive voice which often reflects a class bias in the accent, sometimes probably inappropriately; this individuality is not always sustained throughout the speech, however. Ms.Nagle is most animated when reading about mother and child and other such domestic details, obviously happier in this area than attempting male voices. It would have been a far better narration with dual readers, Ms.Nagle and a companion male.

Told in the classic detective style, moving between different protagonists and scenarios to give different sides of the story, it gathers momentum as the tale progresses. I received a complementary copy of The Golden Hour from the rights holder, via Audiobook Boom, at my request. My thanks for that. My feelings about it are very mixed. Whilst I enjoyed the domestic aspects and the guided tours of Oxford, the actual mystery solving itself I felt to be too little too late and rather rushed. Perhaps reading a print copy would be preferable.

How have I not discovered author Marni (M.K.) Graff's Nora Tierney before now? Clearly this can be read as a standalone as I did and was enthralled. Any past history relevant to the instant story is quietly and comprehensively colored in, providing a rich background and full context to the goings on; characters develop beautifully as the intricate plot unfolds. Some things I figured out early, others were an utter surprise as new clues popped up from the fertile soil of Ms. Graff's imagination. I was held spellbound listening to narrator (AUDIO) Nano Nagle's excellent diction and vocal characterizations (although she didn't quite manage a solid American accent for our heroine--more of a transatlantic flattened sound); I am looking forward to more!

The suspense gathers momentum as the drama unfolds, and the plot is very well crafted, with characters who are engaging and very realistic. The relationship between the protagonist and her law enforcement officer seems to provide a constant as the unexpected difficulties unfold. The publisher's blurb gives hints and clues, and there is no need for spoilers. I couldn't put it down, but that is less of a problem with audio.
Nano Nagle performed beautifully as narrator.
I requested and received a free review copy via AudioBookBOOM.

I enjoyed this book.Nano Nagle does a good job with narration,though the baby squeals could have been removed.Nora is being followed,or is she?No one is sure until the worst happens.Her boyfriend DeClan is a cop,he is on a weird case and can not always be there.It was fast paced and interesting.I was voluntarily provided this free review copy audiobook by the author, narrator, or publisher.”

Not my normal genre I usually read more hard/noir mysteries, But This was a really pleasant surprise!
A well crafted detective story, with well rounded characters and a superb plot with side plots all interwoven. Without sex, violence or bad language.
I wasn't sure at first but was soon convinced I will be looking for more to read from this author.
Narration was good.
I received a free copy at my request in exchange for an honest review.

I don't give out many one stars. I do give out many two to four stars. Rarely do I give out 5 stars. This is my favourite genre of story and it was perfect in all aspects. Hours of pure enjoyment.

MAKE CERTAIN THIS IS ON YOUR LIST OF MUST READS

If you like English mysteries you will definitely enjoy this. Everything about it was just my cup of tea .... thoroughly enjoyable.

I received this audio book for free from the author, narrator or publisher and am freely offering my honest,unbiased review..

I enjoyed this story - it was a bit slow for me at times but the narration was good and once I was fully invested in this story I really enjoyed it.