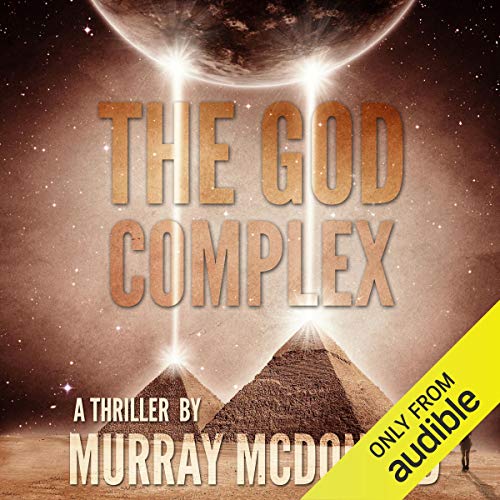 The God Complex: A Thriller

The God Complex: A Thriller

When Cash Harris visits his father for the first time after a 15 year estrangement, things don't go anywhere near as planned. By the end of the night, he finds himself embroiled in a plot to destabilise the government, his father has been assassinated, and he discovers a shocking truth that would have fundamentally altered his life 15 years earlier.

However, all of this pales into insignificance when, along with his best friend and ex-fiancee, he fights for his innocence and the chance to save a world they didn't even know needed saving. They uncover the truth that has been alluding mankind from its very inception. Life, the universe - everything... nothing is as it really seems.

What listeners say about The God Complex: A Thriller

Action packed from start to finish. Not as predictable an end as I expected. Would make a great film. Well read and a great story. Recommended.

Would you consider the audio edition of The God Complex: A Thriller to be better than the print version?

The audio version of this book is well narrated.

What other book might you compare The God Complex: A Thriller to and why?

I have 4 other books from the same author. Each one is held my attention until the very end.

Have you listened to any of Adam Verner’s other performances before? How does this one compare?

I've never heard of this particular narrator before.

I was so glad Audible picked up this author. I hope they will make more of his books available.

What did you love best about The God Complex: A Thriller?

This was my first book from Murray McDonald. It was interesting and caught my attention from very early on. Just when I thought I had it figured out there would be a major twist in the plot. It kept me guessing. What an ending!
He had plenty of humor. Great blend of thriller and sci-fi. I wish more writers would do this.

The narration was good and varied well between the characters. I would listen to Adam Verner again.

Where does The God Complex: A Thriller rank among all the audiobooks you’ve listened to so far?

Not in the top 10, but maybe the top 25. A tricky, rather interesting and compelling offering, that has several unanticipated plot twists and turns.

Would you recommend The God Complex: A Thriller to your friends? Why or why not?

Certainly to other audio book fans.

What does Adam Verner bring to the story that you wouldn’t experience if you just read the book?

Definitely one of the better performances of the years. Brought the characters to life, and owned the story

Not really extreme, but certainly kept my interest, and I did have some chuckles and eyebrow raises.

This book definitely sneaks up on the listener, and comes with enough wrinkles and twists to keep the story fresh and engaging. Recommended highly

The overarching alien concept in the story is new and refreshing, and gives a new perspective to most things we assume in life.
But the screenplay is unexciting. The protagonists have it way too easy, are unusually lucky and seem to have supernormal power that borders on a kids fantasy story. A few disappointments thrown in for the lead characters would have made the story a lot more realistic
Narration was top notch. Full marks for that

Loved the story line. It was fresh and believable while keeping you in suspense. I found the characters to be very interesting and thought the overall product to be very entertaining.

How To Ruin a Good Plot

Would you try another book from Murray McDonald and/or Adam Verner?

What was most disappointing about Murray McDonald’s story?

The writing. It's ... poor. How poor? At one point, he even uses the phrase "one of the more unique places..." Hunh? A professional writer using "more unique"? DIdn't we get that drilled out in high school? Apart from that, it's cliche-ridden. For example, all the women are "beautiful and dangerous". But the bad ones are "dark" and the good ones have sunny dispositions.The worst part is that there are simply no descriptions that bring the world to life. A day is sunny - that's it. Are there clouds? How warm is it? Is there a breeze? None of these details are, apparently, relevant. But, as we all know, those are the things that allow us to see the location in our mind's eye. They're important.

I don't think anyone could bring this stilted prose to life, but the voices just aren't believable.

The plot - the basis for the story offered a real opportunity. Too bad about the execution.

I am finishing the book, because I want to know how the plot lines end. But this is the first time in a long time that one of my audible books has gone days without me bothering to pick it up.

A good listenperiod. I enjoyed it good narration good story. I will look at other books that this Author has written

Good but a little out there

The story line for this book is really far fetched but the action is good and I liked the characters, especially Cash and Rigs. I did find the story line at times a little unsettling.