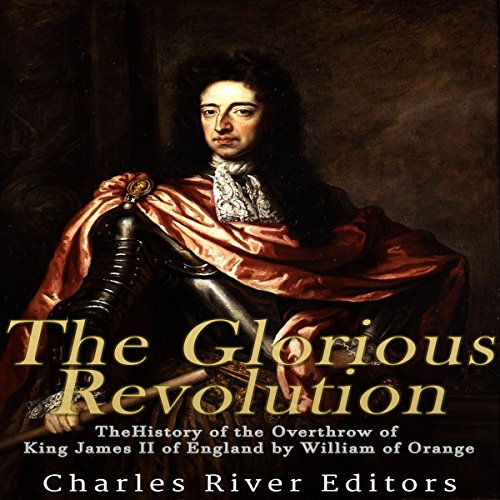 The History of the Overthrow of King James II of England by William of Orange
By: Charles River Editors
Narrated by: Scott Clem
Length: 1 hr and 10 mins
Categories: History, European
3.5 out of 5 stars 3.3 (3 ratings)

Seventeenth century Europe, particularly its latter years, is often hailed as the beginning of the Enlightenment as nations across the continent experienced a surge in innovation and scientific progress, a period also commonly referred to as the Age of Reason. There was English natural philosopher, Francis Bacon, whose book Novum Organum challenged Aristotelian philosophy and stressed the significance of inductive reasoning. Bacon's ideas, which emphasized observation and the implementation of various premises to form conclusions, was later referenced by famed French mathematician René Descartes.

The Enlightenment had been awakened by the European Age of Discovery, but the continent was also a seedbed of insurrection, holy wars, and volatility. People were growing weary of the unpredictable system of monarchy, a post that was inherited only by members of an exclusive bloodline or connection, one that often muted the voices of the people. Time and time again, grossly incompetent and seemingly diabolic rulers had come to power through the rigged regal system.

The Glorious Revolution is an intriguing story of a power war exacerbated by ruthless ambition, under-the-table plotting, and the treachery of familial betrayal. In 1678, a sinister scheme to assassinate King Charles II was unearthed, sending the public into a frenzy of mass panic. Fingers were pointed at the Catholics, who had been accused of concocting the elaborate conspiracy, and this very event would intensify the white-hot flames of the anti-Catholic hysteria that was already running unchecked within the nation. Seven years later, the openly Catholic King James II rose to the throne, and needless to say, the largely Protestant public was anything but pleased. As the people slowly turned against him, the king's daughter, Mary, and her husband, William of Orange, watched across the English Channel from a distance. The people were begging for change in a broken system, and something drastic had to and would be done.

couldn't come to grips with narrators accent, it was very off putting and quite fast. personal preference would have been at a slower pace.

Unacceptable quality for a paid subscription

Audible needs to raise its standards. The reader is worse than most free, Libravox readers. This is unacceptable quality for a paid subscription. It’s not the cost of the book. This one was not very expensive but one of the reasons to subscribe to audible is to feel confident that the standards are maintained. If any Tom Dick and Harry is allowed to read the books, where do I sign up? I can definitely do a better job than this.