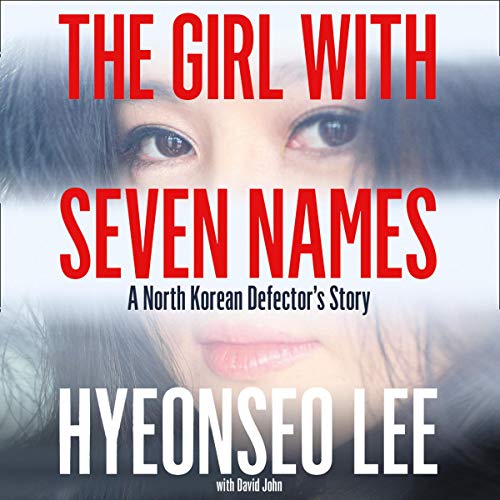 The Girl with Seven Names

By: Hyeonseo Lee,David John
Narrated by: Josie Dunn
Try for £0.00

An extraordinary insight into life under one of the world’s most ruthless and secretive dictatorships - and the story of one woman’s terrifying struggle to avoid capture/repatriation and guide her family to freedom.

As a child growing up in North Korea, Hyeonseo Lee was one of millions trapped by a secretive and brutal communist regime. Her home on the border with China gave her some exposure to the world beyond the confines of the Hermit Kingdom and, as the famine of the 1990s struck, she began to wonder, question and realise that she had been brainwashed her entire life. Given the repression, poverty and starvation she witnessed surely her country could not be, as she had been told, 'the best on the planet'?

Aged 17, she decided to escape North Korea. She could not have imagined that it would be 12 years before she was reunited with her family.

"The most riveting TED talk ever." (Oprah)

"Hyeonseo Lee brought the human consequences of global inaction on North Korea to the world's doorstep...Against all odds she escaped, survived, and had the courage to speak out." (Samantha Power, US representative to the UN)

"This is a powerful story of an escapee from North Korea. In the hallowed meeting rooms of the United Nations in New York, ambassadors from North Korea recently sought to shout down stories like this. But these voices will not be silenced. Eventually freedom will be restored. History will vindicate Hyeonseo Lee and those like her for the risks they ran so that their bodies and their minds could be free. And so that we could know the truth." (Michael Kirby, chair of the UN commission on human rights abuses in North Korea)

What listeners say about The Girl with Seven Names

This was a great story, but the narrator was a total mismatch in my opinion. Her overdone British accent detracted from the story.

A Twofer- Page-Turner and Eye-Opener

Be careful when you start listening - this memoir is really hard to cut off. I kept wanting to learn what happened next. In this powerful memoir, the author, as a teen, inadvertently winds up stuck on the Chinese side of the North Korean border and has to build her own life. Her intelligence, love of family, and courage guide her through a most challenging journey. I learned a lot about North Korean life and culture as well as the indomitable nature of the human spirit.

I have also listened to "A River in Darkness: One Man's Escape from North Korea," a memoir by Masaji Ishikawa. It is another powerful memoir about life in North Korea, as told by a man born in Japan, whose Korean father was enticed into going to North Korea with the promise of a better life. Unfortunately, the family finds themselves at the bottom in social status with no opportunity and life quickly becomes a nightmare unique to North Korea. My heart broke as I read this story and I pray Ishikawa is able to find peace in his soul after what he endured for so many years before escaping.

These books are different. One ends in hope and the other in great sadness. Both help our understanding of North Korea, our world and ourselves. Both are "Must-reads."

The narrator didn't bother me at all. The story was mesmerizing, fascinating. An almost unbelievable true story.

I thought it was a poor choice to have an English woman narrate this book. As a Korean-American woman who is bi-lingual, Ms. Dunn did not pronounce any of the Korean words correctly and lacked animation in her voice making the whole experience of the story inauthentic.

All Americans should read this book!

This woman is a true hero and it amazes me how tough she was. Her mother and brother are also heroes. Sitting in my comfortable home with my comfortable way of life it is scary to think that a whole country could be so brainwashed. The fact that North Korea has a nuclear arsenal is ghastly! We as a people must protect these freedoms at all costs and help other countries to recognize the freedoms they don’t have.

Could not stop reading

What bravery and perseverance. So inspiring! The details were riveting. I am recommending everyone to read this book.

This book held my attention throughout. There was an element of “what’s going to happen next” throughout! Danger, intrigue, was almost ever-present. I found myself thinking, “what would I do if in this circumstance?” I have so much admiration for the author, her keen mind, and heart. And there were miracles in this story, which I consider divine intervention and tender mercies of the Lord!

Just what I needed

I have been working in a Covid ICU for the last year and have been growing jaded and its been hard to share my emotions and struggles. this novel transported me to another world and reminded me of the struggles throughout the world. Americans get lost in our freedom and do not appreciate the things we have. thank you for sharing your real struggle for life and freedom.

What is it like to escape North Korea as a teenager and then need to support oneself ? Hide your identity? Not see your mother or brother for more than 10 years? An amazing true story!