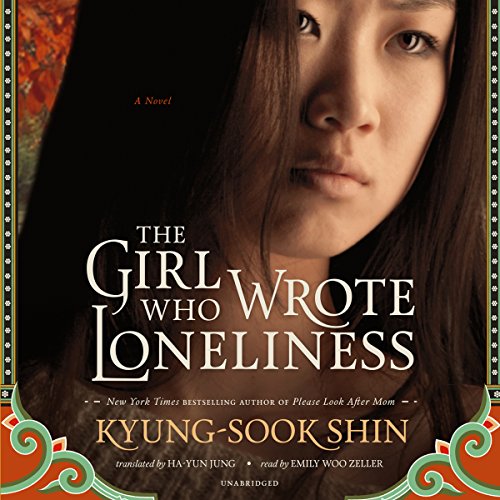 The Girl Who Wrote Loneliness

By: Kyung-sook Shin
Narrated by: Emily Woo Zeller
Try for £0.00

The highly anticipated release of the most personal novel by Kyung-sook Shin, who first burst onto the literary scene with the New York Times best seller Please Look After Mom.

Homesick and alone, a teenage girl has just arrived in Seoul to work in a factory. Her family, still in the countryside, is too impoverished to keep sending her to school, so she works long, sunless days on a stereo assembly line, struggling through night school every evening in order to achieve her dream of becoming a writer.

Korea's brightest literary star sets this complex and nuanced coming-of-age story against the backdrop of Korea's industrial sweatshops of the 1970s and takes on the extreme exploitation, oppression, and urbanization that helped catapult Korea's economy out of the ashes of war. But it was girls like Shin's heroine who formed the bottom of Seoul's rapidly changing social hierarchy, forgotten and ignored. Richly autobiographical, The Girl Who Wrote Loneliness lays bare the conflict and confusion Shin faces as she confronts her past and the sweeping social change of the past half century. Cited in Korea as one of the most important literary novels of the decade, this novel cements Shin's legacy as one of the most insightful and exciting writers of her generation.

What listeners say about The Girl Who Wrote Loneliness

This book is a great example of good literature: full of symbols, imagery, great story, lots to process (might even require second reading). If you are a curious reader and love a great word and story, this book is for you!

Would you recommend The Girl Who Wrote Loneliness to your friends? Why or why not?

It's not an easy story to listen to as the author jumps in time frequently. However for those interested in a time and place we here little about (South Korea during the 1970s) it is worth a listen. The narrator (who may or may not be the author) gives incredible details of the time and what it was like to work and live in Seoul during that period.

This work walks the line between memoir and fiction. Many of the background events (such as the Gwangju Uprising) are lifted straight from history and depicted in a deeply intimate manner. I honestly don't know how much of the author's story is true, and perhaps that is the point.