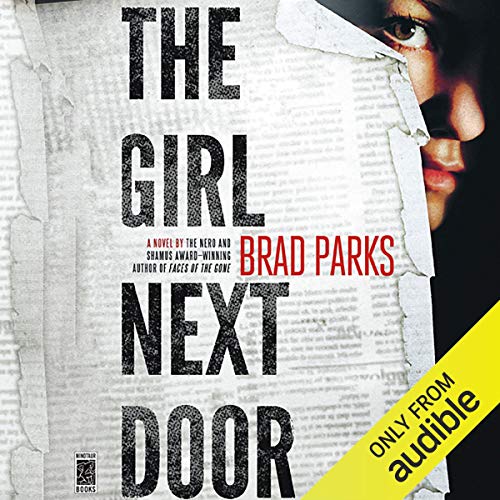 The Girl Next Door

By: Brad Parks
Narrated by: MacLeod Andrews
Try for £0.00

Reading his own newspaper’s obituaries, veteran reporter Carter Ross comes across that of a woman named Nancy Marino, who was the victim of a hit-and-run while she was on the job delivering copies of that very paper, the Eagle-Examiner. Struck by the opportunity to write a heroic piece about an everyday woman killed too young, he heads to her wake to gather tributes and anecdotes. It’s the last place Ross expects to find controversy - which is exactly what happens when one of Nancy’s sisters convinces him that the accident might not have been accidental at all.

It turns out that the kind and generous Nancy may have made a few enemies, starting with her boss at the diner where she was a part-time waitress, and even including the publisher of the Eagle-Examiner. Carter’s investigation of this seemingly simple story soon has him in big trouble with his full-time editor and sometime girlfriend, Tina Thompson, not to mention the rest of his bosses at the paper, but he can’t let it go - the story is just too good, and it keeps getting better. But will his nose for trouble finally take him too far?

Brad Parks’ smart-mouthed, quick-witted reporter returns in The Girl Next Door - another action-packed entry in his award-winning series, written with an unforgettable mix of humor and suspense.

What listeners say about The Girl Next Door

Definitely in my top 10 authors!!

Another great addition to the Carter Ross series. When a woman delivering newspapers is struck by a car and killed it looks pretty clear to all that it was simply a hit and run. When the woman's sister approaches Ross he is the only one that listens. Once he begins to investigate he finds that to further poke around is putting his own life in jeopardy. Not long after an SUV attempts to plow over him and his date in his own front yard, he saves his date but ends up injuring her in the process. EMS and police start looking at him as an abuser. Ross narrows his suspect list to two but doesn't realize until it's almost too late that he's trusting the wrong person.
The is a very good book with some quite funny moments. I thoroughly enjoyed this book and look forward to the next in the series.
MacLeod Andrews does an outstanding job narrating.
HIGHLY RECOMMENDED.
If you found this review helpful please indicate so.
Thank You.

I loved the cat! This had a mystery to be sure, but our hero was a little too weak for my tastes. You must be in the mood for sarcastic humor on this one.

Would you be willing to try another book from Brad Parks? Why or why not?

I purchased another book, one on sale, based on other reviewers liking this author before I actually listened to this one. Not sure if this author is for me. Reader is the reason I did take a chance on this author. Plus, reviewers said this had humor. For me, the jury is still out. I just got off a Philip Margolin run so this author maybe too domestic for me.

Which character – as performed by MacLeod Andrews – was your favorite?

M.A. is a genius with voices and he saved this listen for me. He also reads as Todd Haberkorn for erotica/ romances. His work on Robert Crais Suspect was excellant.

Did The Girl Next Door inspire you to do anything?

sorry, no inspiration at all.

Brad Parks is the man.

Where does The Girl Next Door rank among all the audiobooks you’ve listened to so far?

This book ranks high personally because I'm a Newark native, and I work for a local TV station in the Newark area so I relate closely to what Brad is writing and the accuracy of the locations.

Favorite characters in all of the Carter Ross series for me has been Carters interns, and this is no different.

Which character – as performed by Macleod Andrews – was your favorite?

In this story probably Lunky for sure.

I recently discovered Brad Parks book good Cop at the library and have been hooked ever since! Carter Ross is so funny and a refreshing change from the norm. Macleod Andrews is the perfect narrator for the character. I've listen to all his book (this being the last) and think I'm going to have to buy the two that aren't on audio...LOVE LOVE!!

Brad Parks is a terrific writer---wonderfully clever humor, cool references to film and books, fully realized characters, and good murder mystery plots.
MacLeod Andrews is absolutely amazing in making all this come alive. He is an awesome talent and he should be my boyfriend. Sorry. Couldn't resist.
In some ways, I found this third in the series to be my favorite so far. Loved many of the characters---Lunky and Tommy especially. And even though I pretty much suspected who the villain was (no spoiler alert) I was still satisfied with the ending.
I was so looking forward to the next book except that there's a different narrator. No MacLeod Andrews! Why? Was he too busy? I am seriously debating whether I will get the next book or not.

My heart was just breaking for Carter in this story. And I was so disappointed in Tina!!! The woman is playing some serious heart and head games with Carter but I was mostly disappointed that she didn't have Carter's back. I felt he worked hard for her loyalty and she kind of threw it in his face! And although there was an apology, I was still disappointed in her.

Loyalty is me refusing to purchase any more of Carter Ross series until MacLeod Andrews is brought back as the narrator! I won't even purchase the book to read! That's what I expected of Tina for Carter. -grrrr- Anyway, I hate when a series has a good narrator then is switched out for someone else. Bad idea!

The story didn't draw me in as much as book 1 and 2 but parts of it did keep me laughing and Carter grew some balls in this one! The mystery was plot was intriguing as usual and of course I'm disappointed I won't finish the rest of the series.

The Girl Next Door is Book 3 in the Carter Ross series. Ross is an investigative journalist with the Newark Eagle-Examiner. This series includes wonderful supporting characters led by Tina Thompson who is Ross' boss and editor. Tina continues throughout the series as a single woman who is desperately trying to deal with her biological clock by having a baby, hopefully with Carter Ross's participation. The publisher's summary does a nice job setting up the plot, so as is my practice I'll merely suggest the reader refer to it.

Narrator McLeod Andrews is not new to me (I've listened to the 6 novel Project Eden series by Brett Battles, several novels in Catherine Coulter's FBI series, and other books Andrews narrated), but I had not noticed the versatility of his voice until this series. He gives each character his/her own voice and does a great job with female voices.

I enjoyed this book a ton....I didn't think I would but I loved it I like that it could make me laugh as well as trying to figure the mystery. Will read another of his books.

This book had me captivated from the start. I didn’t quite know what exactly I was looking for when I found this but it turned out to be the perfect mix of mystery, drama and even a bit of humor. I really connected with the “lightness” of the narrator and loved that though he was great at what he did he didn’t take himself too seriously. I recommend this book to anyone looking for a mild thriller. I look forward to reading more from this author.

After enjoying the first two books of the Carter Ross series, I found myself wishing i was wrong about the terrible writing ruining a perfectly good plot and previously enjoyable group of characters. What happened? Much of the dialogue made me cringe and I felt embarrassed for the excellent narrator made to read it. Very disappointing.