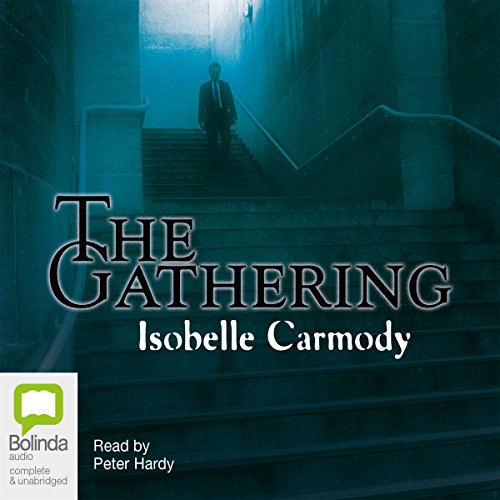 By: Isobelle Carmody
Narrated by: Peter Hardy
Try for £0.00

This supernatural thriller for young adults - which Publishers Weekly described as both "superbly crafted" and "utterly riveting" - pits Nathaniel, 15 and a newcomer to the town of Cheshunt against feral dogs, strange smells, emotionless, robot-like adults, fascistic school monitors, and a demonic high school principal. There is an evil power behind "the gathering", and, although still in mourning for his father, Nathaniel is called to lead the forces of light against those of darkness. Peter Hardy adds his gritty, eerie tone to the work of Isabelle Carmody, who has received numerous awards for her fiction for younger and older readers.

Something is wrong at Cheshunt. Nathanial feels it the moment he arrives. It is not the model neighborhood it appears to be; strange things happen, despite the curfew. And soon Nathanial learns that his presence is no accident. As the dark calls its own, so does the light draw its champions, and Nathanial finds he must confront phantoms from his own past in his battle to stop the Gathering and its creator.
©2001 Isobelle Carmody
Scary Stories
Show More Show Less

"The suspense never slackens, and the resolutions of the many conflicts are powerfully wrought." ( Publishers Weekly)

What listeners say about The Gathering

loved this book. It had me entertained and in suspense. I will definitely listen again.

What a splendid suspenseful book! It was predictable but so engaging, and the author keeps it more on the Thriller side than the pagan side. Totally recommend.

The Tod; yes the dog! Loyal to the end!

Have you listened to any of Peter Hardy’s other performances before? How does this one compare?

There was a realization that ALL involved, no matter who they were, MUST perform their role.