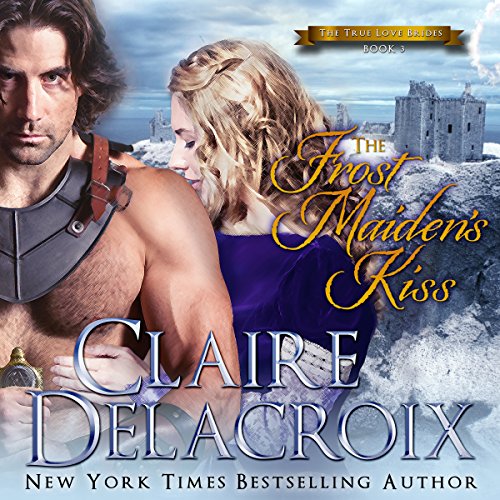 By: Claire Delacroix
Narrated by: Saskia Maarleveld
Try for £0.00

She enchanted him with a kiss - but winning her love would demand all he possessed.

After eight years abroad, Malcolm returns to Scotland with a fortune, a companion even more hardened than he and a determination to restore his inherited holding. But when that companion falls into peril, Malcolm seizes the chance to repay an old debt, trading his own soul for that of his doomed comrade. Knowing his days are limited and determined to leave a legacy of merit, Malcolm rebuilds Ravensmuir with all haste, though he fears he will never have an heir.

A night of violence has left Catriona with no home and no faith in the honor of men. She expects little good from a visit to her lady's brother, Laird of Ravensmuir, a known mercenary. But the handsome laird challenges her expectations with his courtesy, his allure - and his unexpected proposal. Knowing it is her sole chance to ensure her child's future, Catriona dares to accept Malcolm's hand. She soon realizes that this warrior fights a battle of his own and that she holds the key to his salvation. Little does she realize her past is in hot pursuit, seeking to destroy all she holds dear - including the laird who has thawed the frost of her reluctant heart.

What listeners say about The Frost Maiden's Kiss

Starts slowly. Hang in there. You will love it! Rather original storyline with twists and surprises. Believable protagonists and some interesting 'tales' of human and fae characters to spice things up. Super!

Loved Malcolm's story! It was quite unexpected... or perhaps just not what I was expecting. Catriona was a breath of fresh air. Her story was intriguing, though the twist at the end was unexpected, it left the door open for additional characters to stroll through. This entire series has been most enjoyable! I would easily recommend it and tell you the audio is as amazing as the others! Saskia Maarleveld has such a gift that you forget you aren't there. Both the books by Claire Delacroix and the audio books are SO worth your time and the small costs. I'd suggest you read the books, or listen to the audio books in order though, but that is just my preference for the sake of continuity. Enjoy your read!

Reach out and touch this realm -- amazing story

Would you listen to The Frost Maiden's Kiss again? Why?

Of course. I'd like to take the full series and listen to its entirety without listening or reading other books in between. Great writing and very well narrated.

Her warm voice with a flexibility to sound feminine and masculine.

I was so happy to be listening to the rest of this series so soon after I completed The Highlander’s Curse. It is a compelling story and deeply entertaining.

Author Claire Delacroix puts to pen a place so real and rich with character conflict, a reader cannot put it down, and when it is so expertly narrated by Saskia Maarleveld, the experience totally satisfies my adventurous spirit. In this telling, Ms. Maarleveld’s voices for Catriona and Raphael add to the mystic, Catriona is from Inverness and Raphael is from Spain. You won’t be disappointed in this listen. The difficulties each of these siblings find themselves, have me indulging yet again, in the next read of the series.

This is the story of the prodigal brother, Malcolm, who left his family seeking his fortune beyond Ravenmuir. When the caverns collapsed under the holding, portions of the keep slide into the North Sea. Malcolm had no way to rebuild his inheritance. He sold his sword as mercenary for eight years to achieve the riches he now has. His brother, Alexander, was angered by his departure, and not much changed apparently with his return. With the hard work and years away he has returned to rebuild. He brings to Ravensmuir, Raphael, a mercenary with questionable character. Frankly, I did not much like him at the beginning of the story. He was a good man to have as a friend, not foe. To me his loyalty was questionable and certainly he was very opinionated, particularly about Catriona—a man to keep an eye on. His presence added depth to the telling, giving the reader insight into Malcolm and Catriona’s characters.

Malcolm had learned much from his travels. His instinct was to protect women, children and animals and it had grown stronger through the years. When Catriona, a woman, very much pregnant, came to Ravensmuir with Vivian, Malcolm’s sister, we watch his interest grow for this woman, for she was a very beautiful woman. Every word she uttered only made him more interested in knowing her past and how she came to the predicament she was in.

Love, respect and admiration blossom between the two, yet both hold secrets. Would Catriona be able to save this man she holds such feelings for? Could Malcolm turn the clock back making different to ? And even if he could, would he be able to live with himself, knowing Raphael had watched his back for years, saving him many a time?

I simply love this series, learning how each brother or sister find the love they seek as man brushes up against the realm of the Fae. Returning to Ravensmuir was not an easy return for the Fae were yet again afoot. The Ravens had not returned. Was this place to be doomed forever?

If man conquers the Fae, what will become of the realm? What can the Fae King do? How will Elizabeth be involved? Next in the series is The Warrior’s Prize.

Well read making it fun since I’ve read this story & liked it. Plot keeps you on your toes to see what come next. Would be good for hearing multiple times!

Engaging, surprising and filled with twist

Once again, Delacroix weaves in Fae and lore into this tale set along the shores of Scotland. Malcolm has only returned home to his crumbling keep since leaving eight years ago as earn his fortune as a mercenary. Malcolm was an interesting character. His travels were dark times, and in an act of returning a debt, he made a bargain with the Fae to be paid on Midsummer’s Eve. While he has no hopes of leaving an heir, he does hope to restore Ravensmuir to its former glory as his legacy. One cannot help but fall for this noble and handsome laird.

Catriona arrives at Ravensmuir in the service as Lady Vivienne, the laird’s sister. She is fearful of him but quickly finds he is something unexpected. The attraction between happened almost immediately and Catriona’s condition made things interesting, but the romance was slow-building and came from friendship, trust, respect, and admiration before it flamed into something more. Catriona is outspoken, just despite all she has endured. I loved her spunk and bravery even when she was shaking in her skirts.

Delacroix is a fantastic storyteller; she twisted danger, suspense, magic and humor into this romance, holding me spellbound. Again, she delighted me with stories and song of the Fae. The secondary characters particularly the villains were fully developed providing ample reasons to want to throttle them. Maids, siblings and more meddled with the romance and it added humor as only loved ones meddling could do.

Saskia Maarleveld is the perfect narrator with her animated lilt. She adds another layer of enjoyment to an already delightful tale.

The Frost Maiden's Kiss is a fantastic historical romance by Claire Delacroix set in 15th Century Scotland. This is the third book in the True Love Brides trilogy, with a few familiar characters from the Jewels of Kinfairlie trilogy (when they make appearances it feels like seeing old friends returning from a long absence).

The Frost Maiden's Kiss features Malcolm, the long lost Laird of Ravensmuir, who has returned after spending eight years abroad. After becoming rich from being a mercenary, Malcolm quickly rebuilds Ravensmuir as he promised before he left. Malcolm is soon visited by one of his sisters and her family. Traveling with them is a young pregnant woman, Catriona, whose village was destroyed leaving her with no family and no home. Just when the visitors are preparing to leave, Catriona's water breaks extending her visit for the birth of her baby.

It doesn't take much to know that Malcolm and Catriona are destined for each other. He quickly figures out how Catriona became with child and he shows her nothing but courtesy and understanding. He also proposes to her soon after she gives birth to a boy - which he helps to deliver! - and after they are wed, he names the child his heir.

What I love most about Claire's writing is the character development. Malcolm is an exemplary hero who is strong like every Laird should be, yet he is filled with understanding and compassion (he must have acquired these traits by growing up with so many sisters). He is also extremely kindhearted and patient when it comes to Catriona, who distrusts all men at first. Catriona's character is strong, determined, and at times feisty, and every inch Malcolm's equal.

I listened to the Audible version of this book narrated by Saskia Maarleveld. She was outstanding as usual. She provides different voices for all the characters, including a slight Spanish accent for Malcolm's friend, Rafael. Saskia also has a rhythm to her reading that is simply melodic and enchanting. I highly recommended this audiobook!