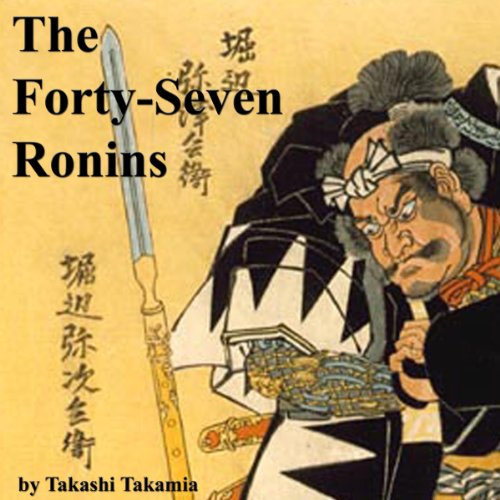 By: Takashi Takamia
Narrated by: Walter Covell
Try for £0.00

One snowy night in 1702, 47 ronin (masterless samurai warriors) avenged the death of their daimyo (i.e. "lord") in a brilliant raid. The episode has become ingrained in Japanese history as an example of the samurai code.

Takashi Takamia’s The Forty-Seven Ronins offers one rendition of this story. In his telling, the ronin’s daimyo, Asano, was bullied by a high official named Kira into an attack that led to Asano’s death. Asano’s warriors plot a careful revenge, scattering throughout the country and lulling Kira into a sense of safety, before they meet again.

This famous story chronicles the end of the lives of the Forty-Seven Ronin, also know as the Forty-Seven Samurai. It is described by one noted Japanese scholar as the country's "national legend". It recounts the most famous case involving the Samurai code of honor, "bushido".

What listeners say about The Forty-Seven Ronins

I enjoyed this audio. It is very short and is about a bunch of ronin who avenge their master's death. It was short and to the point. Had it been an hour longer, maybe it would have been too much. For under $2 this story is worth it though.

Origin of many generations of tales.

It's a good little story about loyalty, honor, courtesy, and respect. It's a simple tale with a fantastic amount of depth to it that allows it to tell much about people and also about Japanese culture.

Walter Covell has a fantastic voice and solid pacing, and told the story well. As this story was originally Japanese, there are many names in it that were untranslated. Covell mispronounced them all. But his mispronunciation was internally consistent, so though it at first made me cringe, knowing the proper names, it isn't something persons who don't know the language would be bothered by.

Be warned: if you have any knowledge of Japanese pronunciation, this reading is almost physically painful at times. If you don't know to tell, however, then by all means take a listen. The reading is otherwise very well done, and the story a classic.

You know the story. Why else would you be reading reviews. Great book. The performance sucks hippo weinie. It's like the guy's larynx is broken. Or he just got hit in the head with a brick. Listen to the sample, then move on to something else.

Japanese pronunciation will make you wince

This is an awful rendition of a classic tale. Don't waste your money. Narration to fall asleep by.