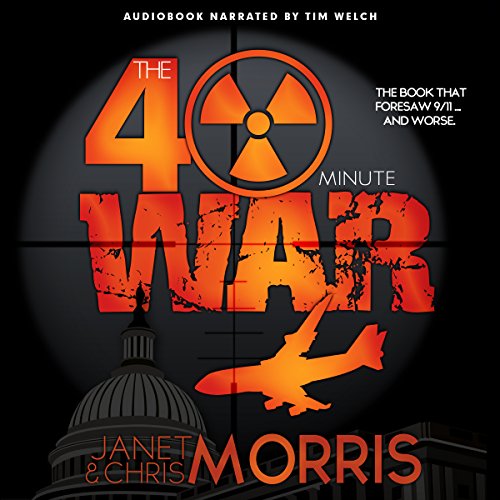 Janet Morris and Chris Morris are the creators of numerous novels, stories, and works of nonfiction, as well as the editors of the Heroes in Hell series, winner of the Hugo Award. Janet is the only science fiction writer invited to participate in the Rolex fiction program, Chris is an accomplished singer-songwriter and narrator, and the Morrises are widely known for their nonfiction work on national security topics such as nonlethal weapons and Russian technology as well as their fiction and music. The Morrises' joint fiction novels include The Forty-Minute War, The Sacred Band, and The Fish the Fighters.

"After Washington, D.C. is vaporized by a nuclear surface blast, Marc Beck, wonder boy of the American foreign service, prevails on Ashmead, covert action chief, to help him fly two batches of anticancer serum from Israel to the Houston White House. From the moment they establish their gritty relationship, life is filled with treachery and terror for Beck, who must deal with one cliffhanger after another during the desperate days that follow. This novel shocks us with a sudden, satisfying ending." ( Publishers Weekly)

An awakening... THE FORTY-MINUTE WAR!

THE FORTY-MINUTE WAR is an exceptionally well created book and shows the effects of a nuclear blast on Washington. The treachery and reality of life is about to hit home for readers in this brilliantly crafted story from Morris.

An awakening... THE FORTY-MINUTE WAR!

Prophetic in a particularly eerie way

Here is a thriller that not only has no dull moment but is also prophetic in a particularly eerie way. The writers-Janet Morris and Christopher Crosby Morris-wrote this back in 1984 (a year that to me signifies a projection into the future, because of the dystopian novel by English author George Orwell, which was published about forty years before.) In the not too far past in history, we had the Hundred Years War; then the Six Day War; and now a war is fought within Forty Minutes. Here, the writers bring us right into the cockpit of a plane as a takeover is underway, a takeover that in many ways, seems to project into the events of 9/11.

Tim Welch, the versatile narrator chosen for this project, has two dozen titles for sale in a number of different genres on Audible. Being a public speaking professor at the State University of New York speaks to the depth of his experience. He breathes life into each one of the characters in this suspenseful Political-military context. I felt as if I am standing right behind the group of Arab terrorists, tongue-tied, praying for my life and for the survival of everyone onboard, wishing the pilots may prevail, somehow, and outsmart the Arab terrorists and prevent calamity. The action, and the complex contrasts between cowardice, heroism, overcoming fear, and a willingness to sacrifice for saving others. All these emotions come alive through Tim’s interpretation. He does the story justice.

I received the audiobook edition as a gift, in exchange for an honest review.

Vivid, Thrilling, and Heartbreaking it's a reality

Would you consider the audio edition of The Forty-Minute War to be better than the print version?

I have not read the print version, but after listening to the audio edition I don't think I have to.

This book vividly draws the picture of what a modern world would be like in the case on a nuclear war. Ironically enough I listened to this at a time when I needed to hear it. It doesn't only look at war from an Islamic perspective. It takes both sides and shows how both point of views work. From this book I learned that if all countries were a bit less prideful and didn't let nationalism get so in the way of issues, most problems could be resolved early with agreements before referring to any sort of violence. Then again, looking back at all the wars throughout history, it is basically the same thing.

Have you listened to any of Tim Welch’s other performances before? How does this one compare?

I have not listened to any other performances by Tim Welch but this one is more than enough to tell me that he is a fantastic narrator. He narrates the story with enough passion to make me believe he lived it. He puts emotion when needed and a flat tone in stances when it applies. He brings enough suspense to keep anyone coming back if not to listen to it in one sitting. He controls his breathing and it is very careful with pronunciation and enunciation which is incredibly helpful to those of us that do not have a print copy to follow along. Overall, amazing narrator.

One sitting turned out to be too much for me, but it is definitely an audiobook I kept coming back to until it was done!

With everything that is going on in the world right now, this is an audiobook that I would 10/10 recommend to anyone just as a reminder of what nuclear war means for all.

An interesting take on what could happen

&quot;The Forty-Minute War&quot; gives a amazing description of what could possibly happen in the event of a Nuclear battle. The story gives viewpoints on both ends of the spectrum. Briefly mentioned in the beginning of the book, Janet and Chris Morris do an amazing job at describing what is going through the Arab terrorists heads before the Nuclear detonation above the Whitehouse, rather than looking at the group as a lifeless enemy. They do this as well as giving the general American perspective which is widespread panic as expected.

This book differs greatly from other war novels that I have read. One that comes to mind is &quot;All Quiet on the Western Front&quot;. This book takes course over the entirety of WWI as opposed to the 40-minute war taking place in modern times. The book does a great job at
showing what a crisis in such a small period of time can amount to.

To top it all off the Narrator of this audiobook, Tim Welch, does a wonderful job with putting emotion into every word that he utters, making the experience of the story that much more vivid. He explains the mood and the setting of the events expertly, taking the details and piecing them together in one great big picture, making the listeners interpretation much more enjoyable.

The Audiobook is just short of 7 1/2 hours, making it a little lengthy for some to listen to in one sitting. Given the right circumstances, this would be great for a day off or a long plane ride.

All in all, I recommend this book to anyone interested in modern time, or any time for that matter, war novels. It does a great job at piecing together what could possibly happen. An amazing job on everyone's part.

Would you consider the audio edition of The Forty-Minute War to be better than the print version?

I've never read the print version, but I thoroughly enjoyed the audio version as it allowed me to relax my mind and simply fall into the story.

I was immediately captivated because the novel picks up right away with a thrilling prologue, following determined airborne suicide Islamic jihad fighters flying over Washington DC on a mission to bomb the White House. Unforeseen consequences after the bombing included not only lost data and communications but the beginning of a terrifying “forty minute war.” The eloquent depictions of scenery and characters that place me as a listener right into the story. As the narrator describes the anxiety and tensions as the characters attempt to change their fate in extensive detail, I could feel as though they’re transported into the suspenseful storyline. The main character, Marc Beck of the American foreign service, evoked sympathy, fear and respect from me as I followed his endeavors. Overall, skillfully written and beautiful diction strung together into intriguing and stylistic sentences.

What does Tim Welch bring to the story that you wouldn’t experience if you just read the book?

Tim Welch as a narrator kept me on the edge of my seat. His high energy voice and inflections drew me into the story in a way I otherwise would not have ever been.

As a whole, the novel drew out a roller coaster of emotions from me. The characters are very real and their fear is just as tangible.

Hear the narrator clear his throat and re-read passages. It is still possible to follow, but very unprofessional. I would like a refund for this one.