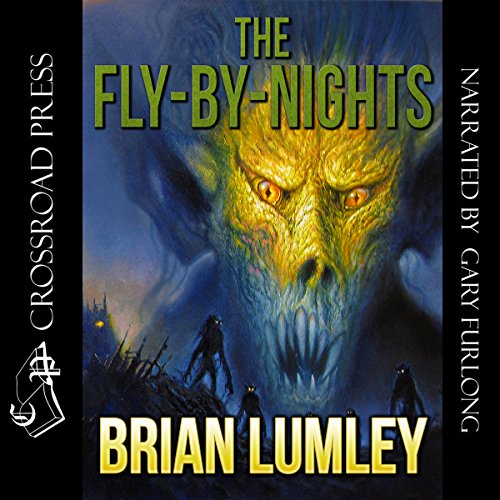 By: Brian Lumley
Narrated by: Gary Furlong
Try for £0.00

One hundred and fifty years ago the world ended. Bombs fell, winter came, and the survivors fled underground in search of safety. Now they struggle to preserve what's left - sleeping by day, and battling fearsome vampiric fly-by-nights after sunset.

Resources are scarce and security is scarcer in this fallout-poisoned world, but one subterranean clan of hardy souls clings to life, scavenging and scraping by until their water supply goes catastrophically bad. Forced to seek a new life above, they leave their long-time home to caravan across the stricken planet's surface, where the light is toxic and the night hides unspeakable monsters.

It is a difficult existence without promise or direction, until word from a band of fellow refugees fizzes through the choppy radio static. The Kindred promise help, companionship, and a new settlement in a distant valley...if only the clan can reach them.

For between the Kindred and the Clan stand a hundred miles of impossible terrain and countless fly-by-nights, and within the Clan itself trouble brews when two very different men fight for the love of one woman who has already made her choice.

It's the oldest story ever told, but this time it could mean the end of humanity.

What listeners say about The Fly-by-Nights

Only of interest to a completest collector

Alas this falls far short of the glorious Vampire World trilogy (Necroscope books 6,7 and 8) to the point that I wouldn't even recognize it as written by Lumley if it hadn't been stated. The premise itself isn't a bad one but it's poorly executed with little of the author's usual style.

Furlong's performance feels weak, hackneyed and dull considering the subject matter. That said, I went to his website and listened to other samples of his narration and was very impressed so I'm guess this was a bad introduction to his abilities as a narrator.

A fesh story for fans of the wamphyri

A fresh take on post apocalypse, survival horror and recognisable to fans of Lumley's unique take on vampires. Listeners who've read the necroscope stories will be able to draw connections. A very good performance from furlong, it really shows his vocal range.

I am a fan . But one of his worst books He has put out.

What made the experience of listening to The Fly-by-Nights the most enjoyable?

tHE VAMPIRES WAS SCARY ENOUGH, HAVE ONE THATS A PLAGUE CARRIER ON TOP OF BEING A kILLER BEFORE HE WAS A VAMPIRE!

THE NECROSCOPE IS WITHOUT A DOUBT THE MOST INCREDIBLE BAD TO THE BONE VAMPIRE HUNTER!

Which character – as performed by Gary Furlong – was your favorite?

THE PLAGUE CARRIER WITH A BROOKLYN BUST YOUR HEAD ATTITUDE AND NOT BEING AFRAID OF ANYTHING OR ANYONE.

If you could take any character from The Fly-by-Nights out to dinner, who would it be and why?

HARRY KEOUGH THE MAN THE MASTER!

I CONSUMED EVERY VAMPIRE BOOK BY BRIAN LUMLEY!