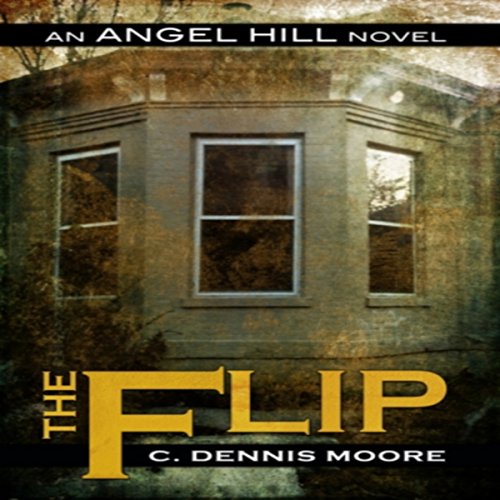 By: C. Dennis Moore
Narrated by: Curt Campbell
Try for £0.00

Hard Times. After almost two decades, Mike finds himself out of a job. With no prospects in Angel Hill, he decides to go into business for himself. He and his friends, Brian, Steven, and Keith, form a company to buy cheap houses and flip them for quick profit. It was a great plan - until their first project turned out to be more than they bargained for.

What qualifies a house as haunted? Brian is still grieving over the loss of his parents when something resembling his mother slithers out from behind the bed and screams at him to get out of the house. With nowhere to turn, he tries the empty house he and his partners have just started renovating. The house on Irving has never seen a death inside its walls, and there are no ghosts lurking in its shadows. But that night, Brian senses something waiting in the dark outside the bathroom door for him. Steven happens upon a drawing left by the previous owner. Something about the picture entrances him, and soon he's searching every nook and cranny for more, spiraling into an obsession over a girl he's never met, dreaming that she's beckoning him to come and be with her in the basement. Keith brings a date over to show off his new business venture, but she has a tragic fall and is hospitalized. Hammered by guilt, Keith starts seeing her in the house, broken and twisted, crawling across the floor toward him.

Does a curse ever die? What started as the answer to all their problems turned into a bigger nightmare than any of them could have predicted. And there's no way out, because for these four friends, it was too late the moment they stepped inside.

What listeners say about The Flip

A worthy challenger to Stephen King!

The Flip (Angel Hill #2), my twenty-second read from author C. Dennis Moore. as always, well written & enjoyable, spine-tingling & suspenseful. I always look forward to the next book from him. Read his books and get into a good author and some amazing characters & stories as I have. Narrator Curt Campbell’s voice & style were perfect for this book and added greatly to the listening enjoyment. I was given an Audible copy of this book & am voluntarily reviewing it. I’ll have to get more books in this series. (RIP Marley January 20, 2014 - July 24, 2018).

It did not keep me interested, didn't really care about the characters, and the narrator made it difficult to connect the characters with their individual back stories.

Not a good narrative. The story was predictable but choppy. I wanted more of back story and less of daily animation