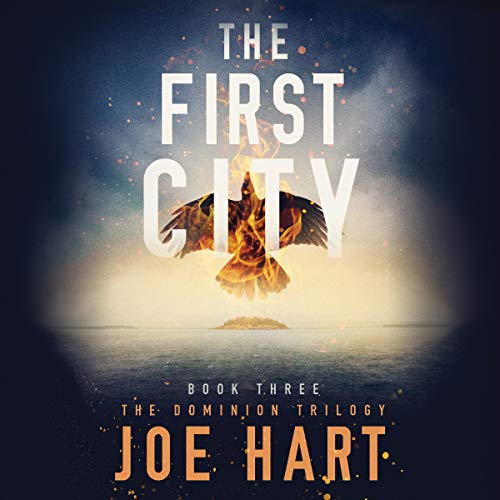 By: Joe Hart
Narrated by: Dara Rosenberg
Try for £0.00

In the thrilling conclusion to Joe Hart's Dominion Trilogy, Zoey discovers who she truly is - and who she must become.

Zoey has only ever known a world with few women and a society capable of unimaginable evil. Now she's about to learn she may be the only hope it has for salvation.

After she and her companions flee a vicious attack, barely escaping with their lives, Zoey finds herself faced with a new threat: video evidence suggesting she is the mother of an unborn baby girl - and the key to mankind's survival. Knowing that her former captors will stop at nothing to control the power that lies within her, Zoey sets out on her own for the last American city, Seattle, in search of answers. But a new enemy awaits her there, and the truth she seeks may lead to her destruction as well as that of all humankind.

This stunning finale, hailed by best-selling author Blake Crouch as a "rapturous, thought-provoking, [and] impossible-to-put-down thriller," begs us all to consider what we would do when asked to choose between humanity's survival - and our own.

What listeners say about The First City

Don't know why I kept going

The story moves slowly and from book one I found myself skipping a lot, and yet... I wanted to know what happened to the characters and was satisfied by the ending. I just wish the books overall were more interesting, maybe a little less detailed setting.

It's hard to put down

Found this book to be a wonderful read, and terribly hard to put down. Is in keeping with the two preceding books. Thrilling with a gentleness in its more interment moments, of its rag tag make shift family.

It ended in a good note. I would recommend for a good action/adventure Maze runner type book...but better

Dara your voice is so soothing it warms my heart I went through the ups and downs of the emotions of these books & I am craving more!
Joe pleases please tell me you are going to write another book or at least make a tv or movie series out of these amazing stories! I need to know more I am so full of wonder & amazed at how wonderful these were!!! I will be sending an email out to you very soon!! Thank you so much for your wonderful mind Joe & your beautiful voice Dara!!

This whole series was an interesting read and the last book revealed some interesting twists to the plot which left me in shocked. The interesting plot points and wanting to finish the series kept me reading to the end. Love the characters in the series too.

I loved this series!

I really thought they would make it into movies. great story line and characters sad but realistic in a scientific
kinda way

really loved it. surprises around every corner. doesn't leave you hanging with either. good finish.

I have enjoyed this series completely! It's a favorite I listen to every few months. It takes you to every emotion of the spectrum, all I could ask more is a book about they're progress from First Island into the next few years & of course a update on my favorite butt kicking family