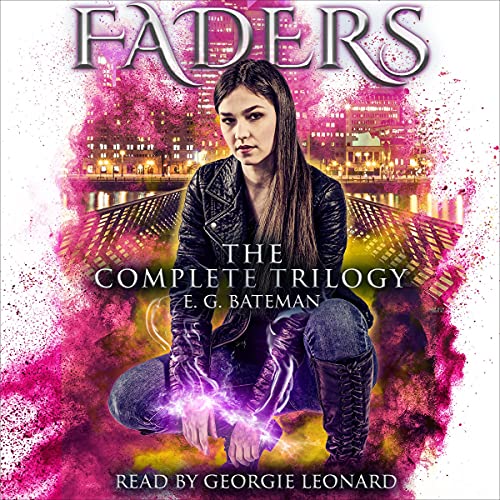 Fade - An enemy who vanishes at whim. A secret academy. Can Jenna use her strange new powers to uncover the deadly truth? A pulse of energy bursts from Jenna, and a mysterious boy she just met fades away before her eyes. Jenna is whisked away to a military academy where she must learn to fight an inhuman enemy. As she meets her classmates, Jenna learns she’s not the only one with powers. But unless she can control her ability, she’ll never be able to track her vanishing nemesis.

The Network - Jenna and her friends have escaped from the covert agents who lied to her about what she was and what her new powers really mean. She’s physically injured and emotionally broken but intends to fight the agency to protect the ethereal, advanced race known as faders. Jenna needs the special abilities of David, a fader she’s never met but who is closely linked with her family’s past. She must return to the military base she’s just escaped from, to rescue David. Can she escape a second time? Join Jenna as she goes further than she believed possible and receives help from an unexpected source. Book two of the Faders series will blow apart what you think you know about faders.

Portal - Jenna is changing! Can her friends still trust her? Should she trust herself? An act of desperation has stripped Jenna of her powers and she feels lost without them. Now living on Full-Earth, out of reach of the agency, they try to settle into a new life, until news of agency atrocities brings them back to Half-Earth. New enemies and old are closing in, and no Earth is safe. As all looks hopeless, a mysterious entity reveals it can return Jenna’s powers, but is the price too high? Jenna's friends are in peril and the future of three worlds is at stake, but billions of lives may be in peril from Jenna herself. This is the adrenaline fueled climax to the Faders trilogy. Listen to it now!

What listeners say about The Faders Trilogy

Pleasantly surprised by this little gem

I really liked this trilogy - it was fast paced and lots of twists and turns in it.

Jenna is our heroine - when we first meet her, she's almost 16 years old and finds out she's a tracker. Her ability, which usually manifests around 12 years of age has been delayed. Her dad didn't want her to be a tracker so had developed something to halt her powers.

Throughout the books, she finds out who her friends are and who are just using her for their own gain. There are plenty of twists and turns, and to be honest, I didn't read the full description of the books and was pleasantly surprised at the turn of events.

Although this is centred on a teenage girl, Jenna is surprisingly mature for her age and comes up with some quick solutions to tricky situations and I feel this makes the book more interesting.

The narration is very good - I usually find British narrators to be bland, but Georgie Leonard does an outstanding job, she even does a very good Irish accent, which a lot of narrators fail miserably at.

Definitely well worth a listen - excellent storyline and great narration.

***Received a copy for an honest Review***

E.G. Bateman wrote a wonderful trilogy with plenty of plot twists. Georgie Leonard gave a great performance. My offspring were kept engaged with the story to the point of requesting it over Television.
The characters were well rounded for the most part. The main character, Jenna basically has a 180 happen to her life. There are villains, pseudo villains, your anti-hero, and hero. Everything starts out in the United Kingdom which is new for me. The British accents were an adjustment for me, but well played out. There are a couple of curse words but do not let that deter you from this Trilogy. It is well thought out and I for one am going to listen to it again.

There were a few scenes that I actually had to go back and listen to again just because of the WHAT JUST HAPPENED factor.

There are a few scenes that should have a warning label of "If squeamish please skip ahead 30 seconds".

Although I'm not a YA, I enjoyed these books. E. G. Bateman's imagination has brought to life some interesting concepts and characters. After spending so much time with these characters, I do wish she would have delved more into the aftermath and the ending. I guess I'm saying I felt it ended with me wanting to know a bit more of how their lives and world regained normalcy. I do however see room for more books set in this world and just maybe I'll get my wish! All in all, I recommend this full of action, twists, likable and some not so likable characters trilogy.