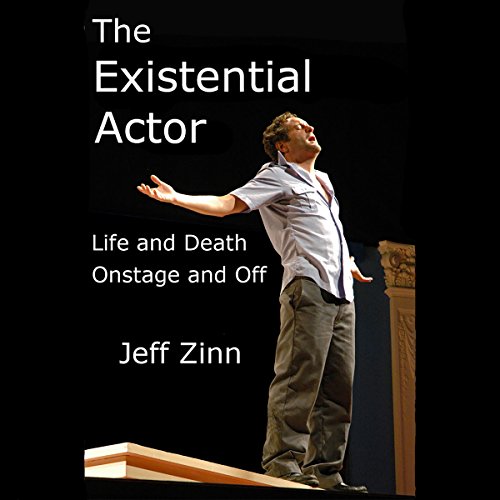 This is a book for the thinking actor, and the finest actors I've known are just that. The best actors bring it all together: body, heart, spirit, and mind. This book is for the actor who thinks about craft and influence, who thinks about the relationship of performance to living, who thinks about doing and what that doing means. Acting is a metaphor, and it's a mirror. A theory of acting, if true, shows us to ourselves. Jeff Zinn knows this. He knows it as an actor, director, teacher, and thinker. His theory of everything is simple and revelatory.

(From the foreword by Todd London)

What listeners say about The Existential Actor

A must read for all serious actors.

Intelligent amalgamation of all valuable acting techniques into one guide. Links all human psychology to truthful acting seemlessly. Aligns well with finding the size and beauty of characters (Adler springs to mind) as well as the fundamental tools of performance such as actioning and listening (transaction). Particularly interesting idea of surrender and heroic narrative, illustrating the life and death needs, desires and dreams of all humans and the honest naked self which is revealed when our lives fall apart. Zinn then goes on to give examples of his theories within plays and characters that we know so well- from Hamlet to Uncle Vanya and suggests why these roles are so loved by audiences and how we too, can apply the philosophy as actors. A thought provoking and extremely useful toolkit.

Using this to improve tours I give

I loved the book. Jeff is a great reader. It will help my work.

Would you consider the audio edition of The Existential Actor to be better than the print version?

Talk or die. Good advice for any actor or, as Jeff Zinn confirms, any human being. By consolidating vast amounts of philosophical perspectives, The Existential Actor manages to condense an array of practical and near-mystical observations by a myriad of actor-trainers (mostly sharing the ethos of Stanislavsky) into a sharply defined defense of the hunger for self-identity.

Were his discussions not shaped by years of working towards an understanding of the psychological pitfalls of a life of creating characters onstage, his thesis might be tedious, simply adding to the weight of critical and artistic theory that floods university theatre programs. Such is not the case. Zinn is actually able to distill these disparate elements into four steps: shape, action, transaction, and surrender.

And when he solicits the inspired notions of Shakespeare, Ibsen, Chekhov, Miller, and Mamet in service of his thesis, one begins to sense the value of such an existential – or inward-looking – approach to the craft. We are all fighting not just to stay alive, but also to satisfy an equally powerful hunger for meaning, a belief that our short sojourns on this planet will count for something.

The actor is the guide to such an adventure, and that fact is the central thrust of Jeff Zinn’s discourse, which, by the way, is well-worth a few hours of listening, especially as its narrated with the same clarity and distinctive pronunciation of his father, whose college lectures I shall always cherish.

A necessary book I've been looking for for a long time

Every actor has a blog. Every "actor's resource" has a litany of information about classes, techniques, and practices. This is a great listen for any actor who wants to know the history of his art and more importantly what his craft actually is. I highly recommend this book for anyone, like me, who has a passion for not just theatre but the philosophy of acting and what it means to be an actor. It felt like sitting around with my fellow actors discussing craft over a stiff drink. Jeff Zinn knows what he's taking about and it shows. The only issue I had was that he is so knowledgeable, there was almost too much historical expiation. However, I'm not sure I would change it because I did learn things I missed in theater history. I'm glad he was the one who finally wrote this down and recorded it for our listening pleasure. I feel comforted knowing that someone still cares about this stuff as much as I do.

An awesome book digs deep into acting. even gets into the PSYCHOLOGY 'sorry bout the psycho.

If you could sum up The Existential Actor in three words, what would they be?

The existential actor is a tour-de-force survey of acting and theater history, contextualized and explicated with the deep body of experimental research into existential psychology. There are so many different lenses with which to read and use this book, whether as an actor, director, teacher, audience member, psychologist - or for anyone interested in tracing a massive and broad sweep of human culture and thought. Zinn manages to weave the history of performance and acting together with a historical continuum of understanding in human psychology; it is a tall order that Zinn pulls off with ease.

Actors and directors who are hungry of a scientific understanding and approach to the craft should stop here first, if only in so far as Zinn provides a guidepost and map to what seems like every branch of performance that has existed, from proto-rituals around the campfire to the Greeks to Shakespeare to Chekhov to Breaking Bad. It is a brilliant tool for those who need to buff up their theater history. And Zinn's breakdown of the 4 elements (shape, action, transaction, surrender) is stunningly powerful in its simplicity.

Moreover, for psychologists who have long studied mortality salience and following the workings of Rank, Becker, Solomon and Terror Management Theory, The Existential Actor applies the architecture of TMT into the purview of film, theater and performance. These cultural escapes and entertainment domains are of huge import and implicate broad motivations within our day to day lives. Zinn's application elucidates critical insights into the myriad ways worldview defenses take hold, and in this regard it equally advances our understanding of both performance and psychology.

I really wanted to enjoy this book

I don't know what it was that I heard in the Audible Sample of this work that prompted me to say "Yes... I think I'll enjoy listening to this" but I never really warmed up Jeff's writing style, or narration. I'm not sure who his target audience is. Perhaps Doctoral candidates?

I never felt a connection... It's not that his words fell on deaf ears, but I never got the feeling that he was trying to reach MY ears. It was as if I were siting in a giant lecture hall at a very stuffy University, on the first day of class.... listening and wondering if I hadn't accidentally walked into the wrong room, or inadvertently enrolled in the wrong class.

Would you ever listen to anything by Jeff Zinn again?

Would you be willing to try another one of Jeff Zinn’s performances?

What character would you cut from The Existential Actor?

Well... There was only one character....

I received a copy of this audiobook without charge, in exchange for an honest review. I understand how much work goes into producing an audiobook, and I honestly don't feel comfortable leaving anything other than a positive review. But... I promised to leave a review, good or bad as a condition of receiving the audiobook.

Understanding that I am required to leave a review, I screen the titles offered to me very carefully. I listen to the samples, and only say yes to those works that I believe I will honestly enjoy. Unfortunately, I was wrong in this instance. I really wanted to enjoy this audiobook. I don't know.... Perhaps I'm too stupid.... Or...