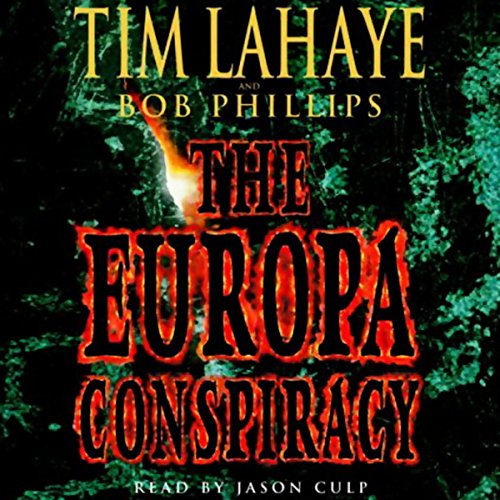 Tim LaHaye has called Babylon Rising his most exciting series ever, and The Europa Conspiracy is the most thrilling and suspenseful installment yet. Reaching back to some of the most dramatic and prophetically significant stories of the Bible, and forward to the creation of ultimate evil in the modern world, the awe-inspiring revelations never let up. It begins when Michael Murphy heads to the ancient city of Babylon in pursuit of one of the most famous and mystifying of Biblical prophecies: The Handwriting on the Wall. But the closer he gets to deciphering the true meaning of Daniel's ancient message for our troubled times, the closer Murphy comes to a shattering confrontation with the forces of darkness that will cause the earth itself to tremble.

In The Europa Conspiracy, Tim LaHaye once again shows how his thrill-a-minute storytelling and deep understanding of the Bible have combined to make him one of today's most popular and influential fiction authors.

Every bit as riveting as the last book & again, the story describes the true situation we have with 'those invisible people at the top who seek world domination at all costs'. Full of suspense & intrigue, a must- read for all who love adventure.

This book is great I just want more books from the series...

As always, the author does an amazing job of describing the events and people with great detail. Toward the end of the book, I actually felt like I was in the tunnel with Professor Murphy. The description of events that are preparing the way for the boy really make you think.

The reader for this series does an excellent job of differentiating between characters.

I can't wait for the next book in the series.

Optional is the choice

I don't like the way it ended since I can't find book #4. Is there one to look for? Thanks

I really enjoyed this book as I have enjoyed the entire series. I was actually looking every 2-4 weeks for the next release. it sort of indiana jones like with a focus on God and possible future global events.

This book came off as preachy and shallow.

There was a minimum of story, and the story told was incomplete. The first two parts of this series at least completed the tale started. This book did not! It seems Mr. LaHaye forgot to finish his work. The hero was left stuck in a tunnel trying to get himself and a friend out. There was absolutely no resolution.

I was very disappointed in this book.

AND to boot there is no date for a part 4 to this series. I guess we will have to wait until Mr.LaHaye wakes up to finish what he started in this book.

Sad, wat started out to be a terrific series stopped dead with this book.

Already own the book, aubile makes it alive. Can not wait for the next book

what was this book anout?

The narrator was AWFUL at first...very nasally and annoyig to hear, but somewhere in the middle the voice regulated out and was much more pleasant to listen to.
loved the story...The cliff hanger ending was frustrating, but perfect. going to purchase #4now.

This is the first book of the series that ended with the main character, Murphy, in serious peril (the other endings ended in hopeful settings). I really object to this ending as it feels too abrupt, hurried, and not thought out well... almost like you ran out of time or deadline. If you have to end a book like this, some kind of explanation from the author(s) would have been a nice consideration of your readers/listeners.

No, it was a passable story until the very end.

Would you recommend The Europa Conspiracy to your friends? Why or why not?

No, it was left unfinished.

Which character – as performed by Jason Culp – was your favorite?

Did The Europa Conspiracy inspire you to do anything?

Sort of. At times it had me examining my faith.

If you just want inspiration, maybe it would be OK, but if you want a novel just leave it on the shelf.